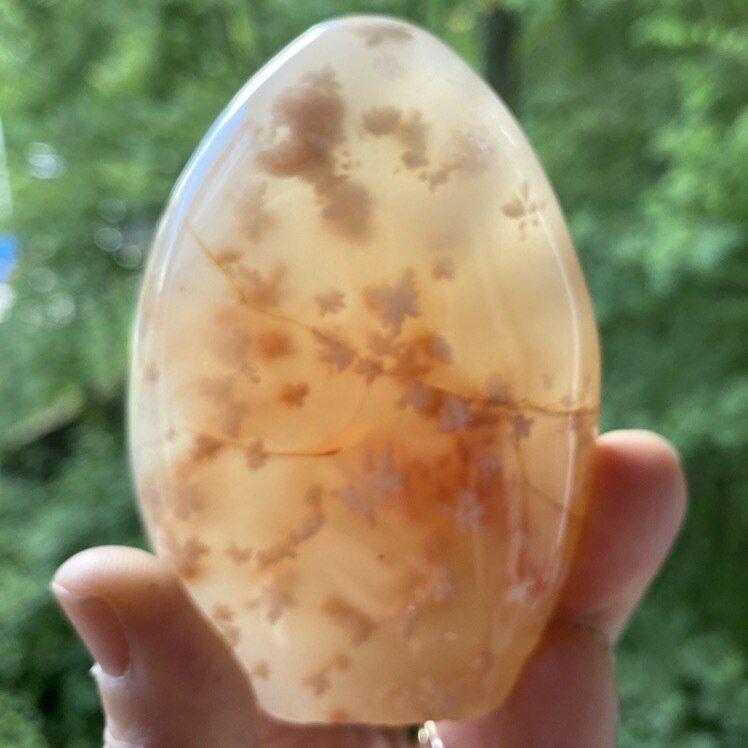 This new Flower Agate out of Madagascar is a bit like carnelian, pink chalcedony, banded agate, and fisheye ocean jasper had a baby in a white rose garden.  Madagascar basically “does what she wants” when she’s making her rock babies– and we love them all.  I noticed the pale pink of the stone first, which then met up with a layer or area that looks like carnelian.  There can be translucent milky to smoky areas, as well as sparkly druzy bits in the voids of some of the specimens. The “flowers” are a more opaque white chalcedony “plumes” that seem to be coming into focus from the depths of a slightly murky sea.

Christopher and I started off reading Flower Agate on Friday at the end of the day and then I brought some home with me for the weekend, so that I could do a more in depth sampling of the energies before describing what we sensed about it.  Friday, however, a very solid stream of information came through that identified Flower Agate as a technical energy worker, or one that will initiate corrections in the energy body, given a little intention and awareness.  It’s main work was first described as assistance with manifestation and abundance through clearing, realignment, and empowerment of the energy body.  It identified as a “get stuff done” stone, moving people into their proper groove/track with the cycles of their core alignment, purpose, and destiny.  It’s a “go with the flow”, “go with your joy”, “go where the magic takes you in the here and now” kind of stone.

Other themes that came up were uncovering hidden talents and focusing sacred sexual and creative energies into usable generative potentials for moving and shaking things up to be made manifest at the physical level.  It can be used to “make sacred” that which needs to be sacramentally rooted to receive the gifts that one can bring forth when sitting in alignment and connection to the earth, the joy of living, and creative expression.  It may be helpful in shifting perspectives to see “the present” as a gift and a blessing, as something sacred and worthy of respect and attention.

It suggested heightened synchronicity, synergy, zest, and lusciousness unfolding, if one would be willing to “go for it” and just surrender to the faith that the universe has something really awesome to share with you in perfect timing.  I have often seen carnelian as a “lust for life” stone and there are definitely those energies in Flower Agate, which  contains carnelian within it.  Flower Agate definitely wants you to get more lusty about living your life.  There was a direct womb to heart integration associated with it.

What I learned over the weekend is that Flower Agate is inherently a Sacred Feminine Trinity stone that seeks to unify, integrate, and bring flow between the Maiden, Mother, and Elder aspects of the self.  When a person is acting in the physical world with those three aspects in balance and harmony with one another, there is joy in purpose, wisdom in creation, and trust in the flow of ideas, guidance, and resources from the energetic to the physical levels.  In short, it tempers the innocence/joy of the Maiden with the wisdom of the Elder, to express as a new creation through the Mother.  The ability to flow with the Sacred Trinity within means being able to pull from all perspectives necessary to remain in the most fertile ground of creation and manifestation possible.  It is the stone of the “Rising Feminine”, as the female mass consciousness is going through difficult shadow healing as well as reintegration with all of the parts of itself.

Flower Agate can be described as an energy that helps in the “reblooming” of the enjoyment of being alive after a long, perhaps painful, and exhausting movement through more dense and difficult life challenges.  This stone would be well matched with someone who has gone through somewhat traumatic life events, or extended times of crisis, who has done the hard work of healing and shadow work already–but who is still feeling jaded, guarded, empty, and without joy.

For these people, life is a hard journey, not a delightful adventure where things feel fun, easy, and free for a hot minute or two.

The maiden is the aspect within the feminine that is the most shocked, traumatized, and destroyed by an unloving and unfriendly world.  It is the maiden who is first made invisible through life experiences, particularly the ones that suggest that she was never safe in a world such as this, which… you can’t even blame a girl for thinking, because it has often been true.  It’s almost as if the over serious “mother” or “elder” aspects of the self have tucked away the giggly, joyful “maiden” in some padded cell within to keep her safe.  When the maiden’s heart gets broken, it gets broken hard.  Ain’t nobody got time for that.

But things are changing.  We seem to be in the process of creating the new structures and realities of what it means to be female on a more “woke” earth.  We need our inner maidens to be their beautiful, innocent, Pollyanna selves to nurture us with the inner giggles, trust, and unicorns of the mind, so that we can even envision what these new structures should be going forward.  The Maiden is you before the world got to you in its ugly ways.  The Maiden is the rose colored lens through which we view the world when we need to fall in love with it again, especially when it’s still a little ugly.

Many of us need to fall in love with being embodied again.  We can’t do that without healing, claiming, and re-integrating our Lisa Frank loving inner maidens, who are dripping in glitter, laughter, and mad crushes of the week.  The maiden believes in true love, the goodness in the world, and puppies.  Yes, of course she’s a bit delusional, but she sees the world as it “should be”.  Right now, we need to remember what the world “should be”.  How do we create that which we cannot envision?  Bring on the joy and laughter, especially as the structures underneath the old ways are beginning to crumble and disintegrate!  We should definitely be dancing as the walls come tumbling down.

Flower Agate should be the new totem stone for anyone who feels like they have seen “too much” to go easily back into the mindset of spontaneous and playful dancing with a friendly and supportive universe.  Stop and smell the roses, like, for real.

How to Work with Flower Agate

There are several good ways to interact with Flower Agate to get the desired good vibes out of it.

Dreamtime Interaction- It specifically requested night time work through the Crystal Whisper Cards, but I had done this before I specifically pulled that card, so I got confirmation that it was the right way to go.

Trinity Reintegration- I took home three Flower Agate palm stones and one heart, and upon going to sleep, plopped one over my heart, one over my womb/belly chakra areas, and the smaller heart went into my sleeping mask over my 3rd eye.   I asked for “Heart/ Womb/Mind Healing and Integration” and for adjustments in any system that needed it for me to get back on the same page of living in a friendly, joyful world that is itching to support me.  The womb represents the “mother” aspect, the heart is the “maiden”, and the 3rd eye is the “elder”.

Pocket Rocks- The carnelian aspect of the Flower Agate would be great to keep you more zippy and zesty through the day.  (You could also successfully use this as a “booby rock”, too.  The pink in the stone makes it an excellent heart stone.)

Crystal Grids- You could actually create a 4 stone grid with Flower Agate, or keep to the Seed or Flower of Life templates.  Since it has such a strong affinity to trinity geometry, you could set up a single Flower Agate at the center of a triangle of another stone (3 rose quartz stones surrounding a Flower Agate) or you could triangulate yourself with Flower Agate, using yourself in the middle for a meditation or sleep grid.  You could totally triangulate your bed with it, since it likes working while you are asleep.

Other methods to interact with stones are not excluded.  I’d still probably create a gem elixir with it, for example.

Carnelian – to reinforce vital creative life force from your inner maiden or need to direct healing to the sexual centers.

Sacred Heart Rose Quartz – if the work to heal your maiden is hard core and the damage was extreme and retriggers you, this is a good additional companion.

Ibis Jasper – a ridiculously powerful shadow worker when you actively are exploring your subconscious for hidden wounds.

Red Jasper – if you need to include additional grounding and stabilizing, as well as helping you release what you no longer serves you.

Ocean Jasper – one of the best “integration” stones for regathering parts into a whole, as well as emotional healing.

Rose Quartz of any kind – there are so many amazing rose quartz variations coming out of Madagascar, and all of them are exceptional heart healing stones.  Use any of them that you are drawn to, Rose Quartz, Star Rose Quartz,Blue Rose Quartz, Lavender Rose Quartz, Pink Girasol, Magenta Rose Quartz, Elestial Rose Quartz.

Amber or Copal – good for those in “shock”, add this if you are feeling dissociated or vulnerable, as well as adding the stabilization of ‘tree” energy.

Mangano Calcite – one of the best heart soothers after trauma or crisis, deep grief healing.

Indigo Gabbro – a technical worker that supports a gush of incoming, supportive healing energy from the crown and moves it strongly into the material levels.

Moonstone of any color/Amazonite/Garnierite – Divine Feminine comfort, nurturing, and alignment.

Herkimer or Tibetan Diamonds (natural DT quartz) – like Rutilated Quartz, it connects independent aspects, Tibetan Quartz connects to larger consciousness fields so that your personal work is a more efficient “ripple” into the collective feminine.

Banded Anything – establishes connection between many layers of the self.

Malachite – uncovers hidden issues or aspects that are harder to reach in order to heal.

Candle Quartz – a prayerful stone, like “lighting a candle”.

Hematoid Quartz (sacred heart, golden healer, crimson moon) – all of these stones are about healing fractures in the system.

Preseli Bluestone –  a stone used in the making of Stone Henge.  If you want to take the healing work to a multi-dimentional place beyond your immediate system of self, or if you have Celtic lifetimes to heal, this is very helpful.

Sodalite – assists being less triggered by old wounds so that you can maintain your ability to observe and process whatever comes up.

Flower agate, in my opinion, is a stone that all females should be working with in these times because our personal healing of feminine wounds is critically important in order to dance with the rapidly changing dynamics on the planet.  We want to get rid of the shackles of being dominated, disregarded, and harmed by predators (poor maidens!), which has put the feminine in a “victim” position for thousands of years.  They are very deeply rooted distortions and we need to reclaim our power and rip ourselves out of the wounded victim drama that we’ve been submerged in for way too long.  So, witness the wounds of the maiden.  Do your shadow work.  Then, get that sweet girl inside of you giggling again so that the fresh infusion of joyful innocence of how things “should be” can start unfolding in your own life and on the planet.  The Maiden’s Heart is the most magical thing on the planet.  It’s like a unicorn that is rare, pure, and full of love and confidence in goodness.  Reclaim yours!