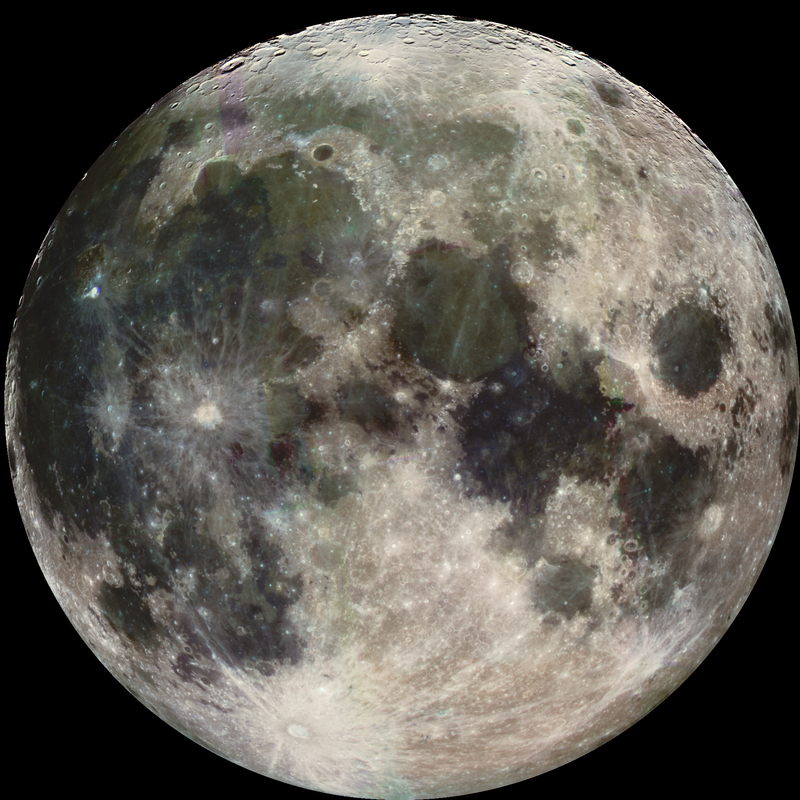 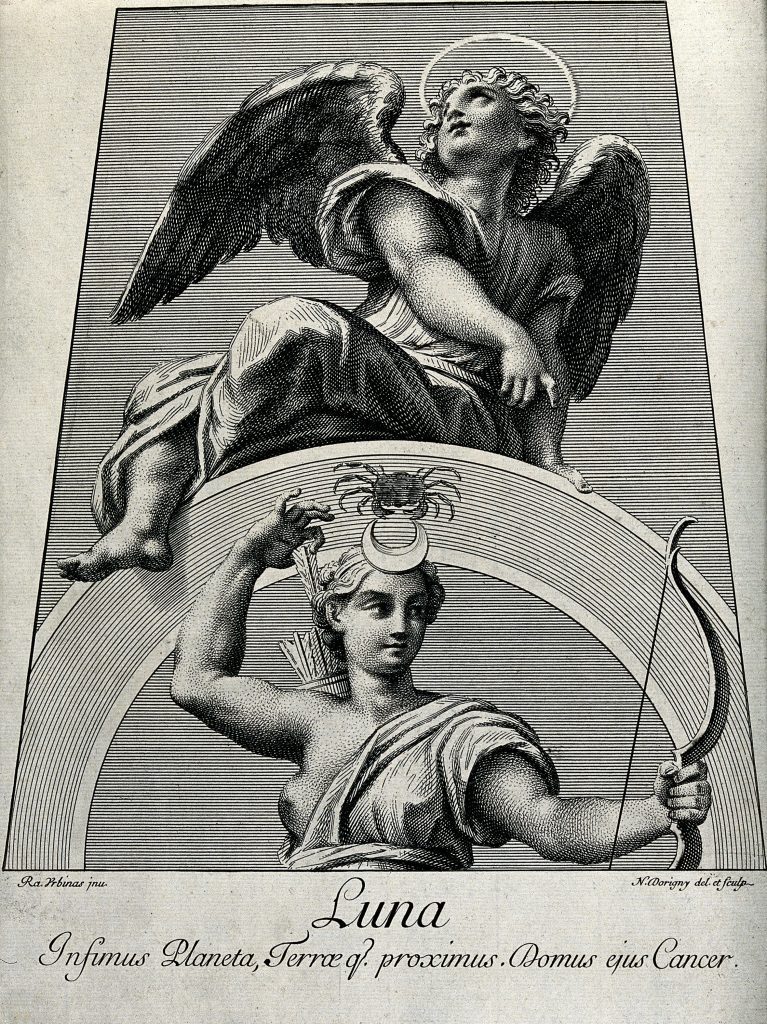 (A 17th century engraving of Diana the Moon goddess, with an angel above her, by the French artist Nicolas Dorigny.  The crab on her head signifies the zodiac sign Cancer, which is ruled by the Moon.  Image Source: Public Domain, Wikimedia Commons.)

THE PLANETARY GEMSTONES OF THE MOON

Although mostly forgotten today, there are traditional connections between astrology and the mineral kingdom.  The birthstones are actually a 20th century invention but they echo an ancient belief that each planet and zodiac sign had gemstones associated with it.  Although these listings vary, they follow a simple rule.  Each material has a symbolic connection with the planet and therefore could serve as a vehicle for its energy.

Both the Moon, and many of its spiritual beings, were associated historically with silver.  The metal resembles both moonlight and water.  While it tarnishes black, it can be restored by polishing, similar to the changing phases of the Moon.  All metals were once luxury goods.  Their shiny surfaces reminded people of the light emitted by certain celestial bodies.  Because gold does not tarnish, it was associated with the consistent appearance of the Sun.  Silver was seen as “semi perfect”, representing the cool light of the changeable Moon, while the other planetary metals were “imperfect”.

Most of the metaphysical properties of silver derive from its physical characteristics, lunar connection, or use as currency.  Silver’s durability but susceptibility to corruption made it a symbol of both morality and redemption in the West.  Although the metal tarnishes, said to represent sin traditionally, it can easily be restored by cleaning.   This quality is interpreted more neutrally today as supporting personal growth, self knowledge, and cleansing heavy energies.

Silver has been used historically to make mirrors, often in the round shape of the Moon.  The reflective metal came to represent spiritual sight like intuition, personal reflection, and the deflection of negativity.  Because of its connection to the night, it also signifies protection from the forces of darkness, just as silver bullets are thought to injure werewolves in contemporary folklore.

While most countries adopted the gold standard from the mid 19th to 20th centuries, where paper currency could be exchanged for its equivalent value in gold, silver was the principle metal used for commerce for centuries before that, associating it also with abundance, good luck, and success. 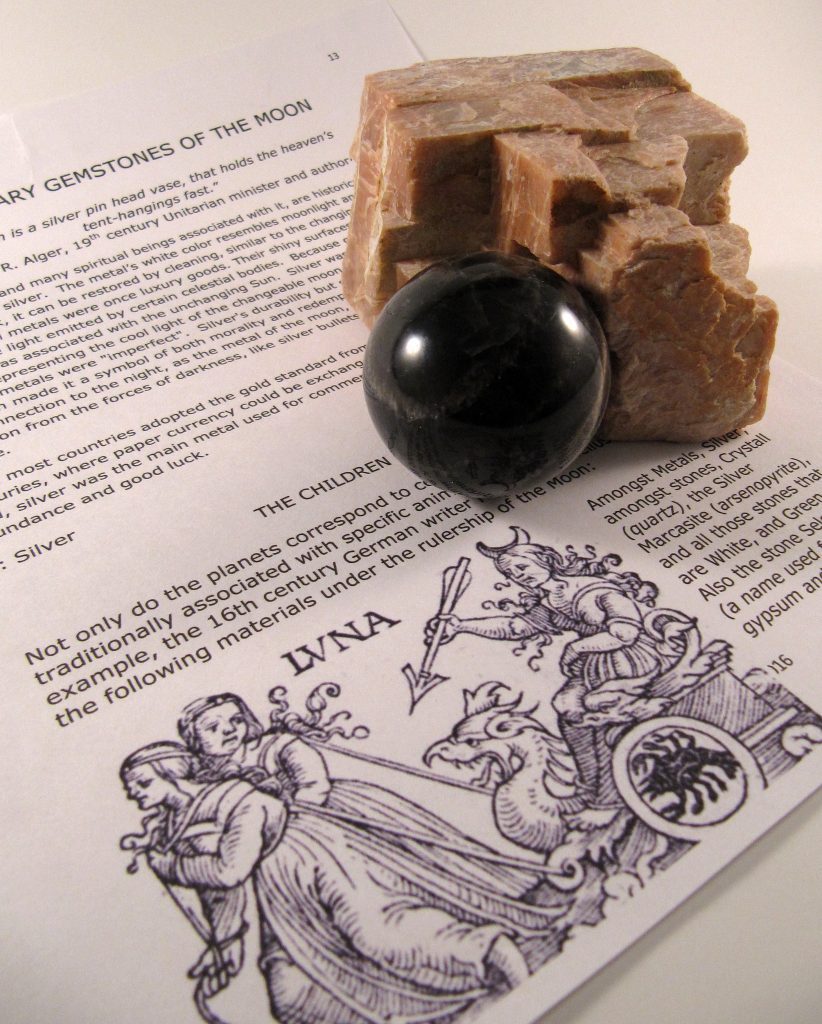 (A black moonstone sphere and pink moonstone rough on a handout from our workshop.  As the name implies, moonstone is traditionally associated with the Moon.   The term is applied to different varieties of the mineral feldspar that display adularescence, a bluish white sheen on the surface.  Image Source: Christopher Lee Matthews.)

THE CHILDREN OF THE MOON

Not only do the planets correspond to certain areas of life, each is traditionally associated with specific animals, plants, and minerals. For example, the 16th century German writer Heinrich Cornelius Agrippa lists the following materials under the rulership of the Moon:

Amongst Metals, Silver; amongst stones, Crystall (A), the Silver Marcasite (B), and all those stones that are White, and Green.  Also the stone Selenites (C), Lunary, shining from a white body, with a yellow brightness, imitating the motion of the Moon, having in it the figure of the Moon which daily increaseth, or decreaseth as doth the Moon. Also Pearls, which are generated in shels of fishes from the droppings of Water, also the Berill (D).

A = Quartz.  B = Arsenopyrite.  C = A name used for both gypsum and moonstone historically.  D = Beryl but more likely, aquamarine.

(It can be difficult to correctly identify stones in historic texts.  Names drift over time and minerals recognized today as completely different things were unknowingly seen as one gemstone, named by their color.  For example, topaz once meant peridot, then all translucent yellow stones, and eventually the aluminum silicate we know today.)

Other period astrological texts also include:

E = A luxury trade good in antiquity, from Southern Jordan. 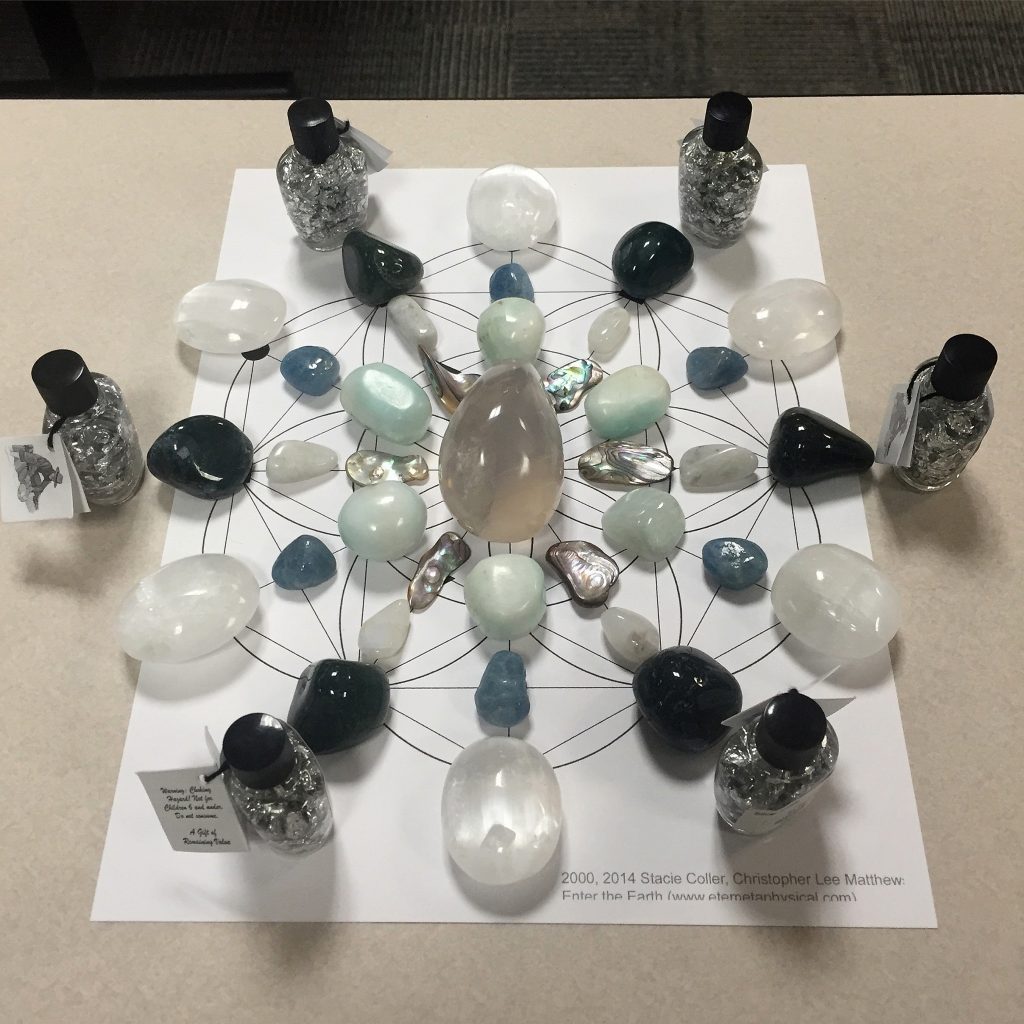 (A lunar crystal grid from a planetary gemstone workshop.  It has a girasol quartz center stone, often sold under the trade name “moon quartz”.   One arm has selenite, aquamarine, and aragonite, a mineral used by sea creatures to produce their shells.   The other one has silver leaf in bottles, moss agate, rainbow moonstone, and abalone shell.  Image Source: Christopher Lee Matthews.)

By reverse engineering these correspondences, we can learn lunar qualities in stones generally:

2: Stones that resemble the moon in color or have a white flash, once thought to change with its phases: selenite, the trade name for crystalline gypsum, and the various feldspars with a flash known as moonstone.  Girasol quartz is commonly sold as “Moon quartz”.  It is an uncommon white cousin of rose quartz, with a golden blue glow.

3: Materials that resemble water: clear quartz, beryl (aquamarine), and glass.  The Moon is associated with water, especially the ocean, because of its influence over the tides.  We are surrounded by glass today but it was once an incredibly prized material.  As translucent as water and often used to hold liquids, one can see how period authors considered it lunar.

4: Precious materials from the sea, often organic in origin, like pearl, coral, and shell.

5: Green stones that representing growth.  Historically the Moon was thought to rule the movement of all water, not just the oceans, so also represented the growth of crops from rain. 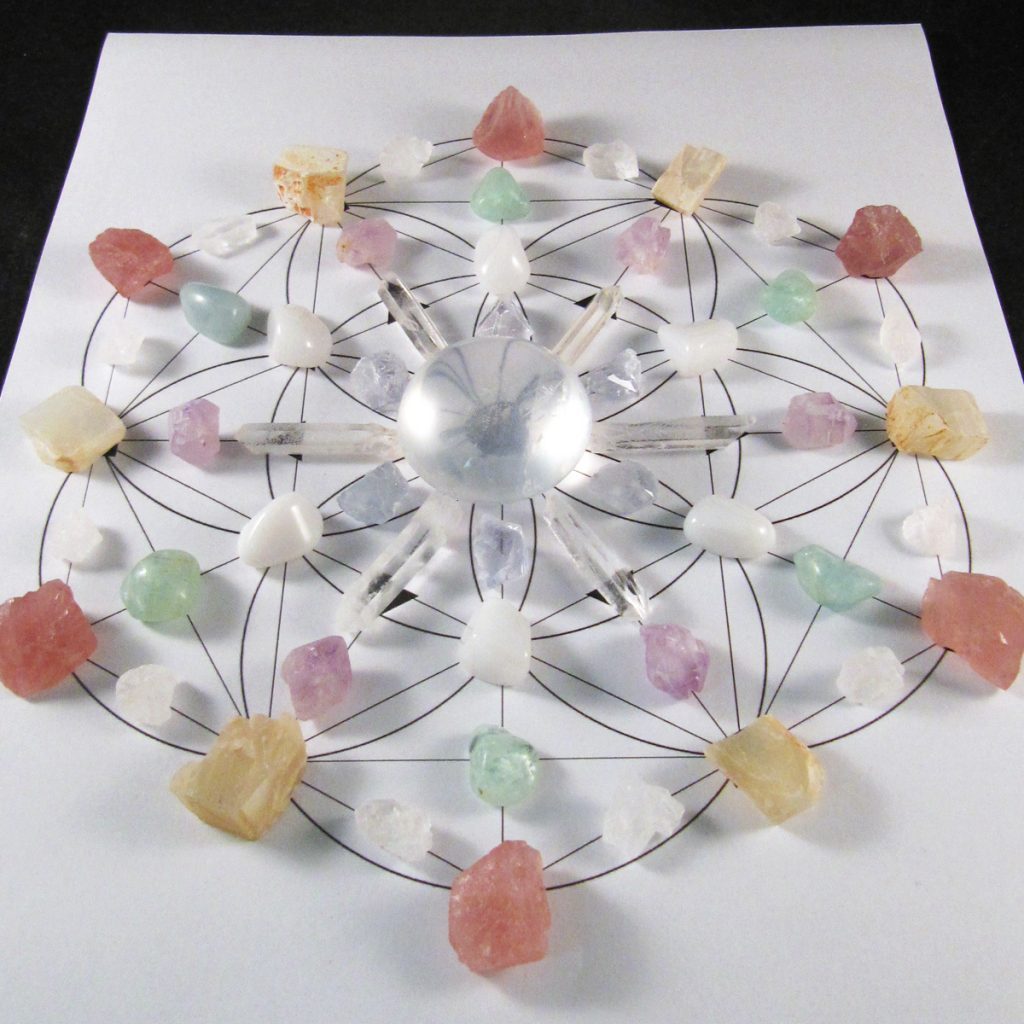 (A Full Moon crystal grid from our website, www.etemetaphysical.com.  It also has a girasol quartz center stone.   One arm has rose quartz, aquamarine, milk quartz, and celestite crystals.  The other one has rough moonstone, amethyst, and clear quartz points.  A border of white salt chunks surrounds the entire grid.  Image Source: Christopher Lee Matthews.)

TEARS OF THE SEA

“He who would search for pearls must dive below.”
~John Dryden, 17th century English poet~

There is a long tradition of using gems in India to counter balance problems with both the natal chart and transiting planets. Large, flawless stones, usually set in specific metals are prescribed. Each planet has a primary gemstone, if one of sufficient size can not be found or is too expensive, then an alternative in a similar color is used. The primary stone of Chandra (the Moon) is pearl and its substitutes also appear lunar like moonstone.

A pearl is an organic object produced by certain molluscs, most notably the oyster. They form to protect the animal from injury or a foreign body, wrapping it in layers of the minerals calcite and aragonite and the protein conchiolin. Natural pearls are a rare occurrence and were once the most precious jewelry material available, known as the “queen of gems”. In the early 1900’s techniques were developed in Japan to produce cultured pearls, which made them available to the greater public.

Because of their white color, biological purpose, and layers, pearls represent purification, spiritual protection, and the overcoming of obstacles. Since they come from the ocean and are round like the Moon, they are lunar symbols, connected to the emotions, romance, and traits culturally associated with the feminine like intuition. Pearls are also said to have a calming effect, just like they help the oyster with an irritant, or are used to reveal and pacify the root of a personal wound.

“Though the terror of the sea gives to none security, in the secret of the shell, Self preserving we may dwell.”
~Muhammad Iqbal, early 20th century Pakistani poet~

Astrological texts rely mostly on gemstones known in antiquity. Many new minerals have been discovered, others have become readily available, and familiar ones have turned out to be more than one type.

Because the Moon influences the tide, it has a close relationship to the ocean.  While shell, coral, and pearls are commonly seen as lunar materials, the rock world also has marine fossils.  Many of them have a symbolic connection to the home, traditionally ruled by the Moon in astrology.

7: Ammonites: The ammonites were squid like animals with an external shell.  They created increasingly larger chambers to accommodate their bodies as they grew.  Since the ammonites carried their homes with them, many contemporary metaphysical books associate them with the spiral journey of life, house blessings, and managing psychic gifts like empathy.

8: Sand Dollars and Sea Urchins: Historically in England fossil echinoids were placed near doors, windows, and hearths to watch over the home and bless the kitchen, especially the making of bread.  Sand dollars are associated metaphysically with wealth, spiritual guidance, and protection, guarding the openings of a house or the chakras of the energy body.

This blog is part of a series on the planetary gemstones, adapted from my workshops on the topic.  Some articles are on my old personal blog.