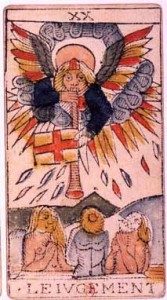 This blog is part of a series on the historical and metaphysical tarot, Fooling with the Deck: A DIY Journey through the Tarot. 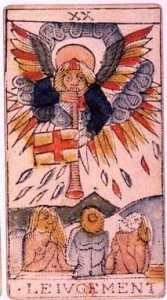 (An early 18th century Judgment card, from the Jean Dodal version of the Tarot de Marseille, after which most 19th century esoteric decks were based.)

Judgment, also spelled Judgement, is typically the twentieth card in the sequence of the trumps. It was also known historically as the Angel. Although named after the Last Judgment, it more technically depicts the Resurrection of the Dead. Christians believe the souls of the dead will be restored to their bodies, or given new ones, to face God’s judgment.

In the 18th century Tarot of Marseille Judgment above, three people rise from the same rectangular grave, answering a call from an angel. The angel’s trumpet bears a flag with a cross. The three figures are a woman, man, and possibly a monk with tonsured hair, seen from behind, signifying that everyone will be judged. 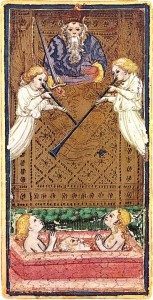 (A 15th century Judgment card from the Visconti tarot.)

Usually an angel or pair of angels are depicted. However the 15th century Visconti tarot also includes God in the scene. Later decks are missing certain religious or political figures because putting them on playing cards became seen as sacrilegious or offensive to authority.

For example, in 18th century Bologna, local church officials asked printers to remove the Pope, Popess, Emperor, and Empress from the deck.  They were replaced by four cards depicting “Moors”, a historical name for the Muslim population of Northwest Africa and the Iberian Pennisula (Spain and Portugal). This racially stereotypical motif is also found in other decks and may reference the Arab introduction of playing cards into Europe.  The church also requested that the Last Judgement be removed, because of its angel, but it remained the same.

The 15th century game of minchiate is a sister to the tarot, played with 97 cards instead, with 40 trumps and a Fool. Many of the potentially offensive trumps inherited from the tarot were replaced or redesigned. The deck has a similar looking card with an angel, playing a trumpet, but over a cityscape instead. Rather than Judgement, it is an allegory of Fame. 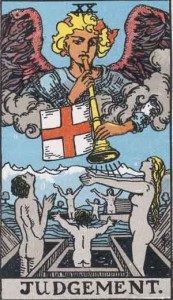 (The Judgement card from the early 20th century Rider-Waite deck, after which most of our contemporary decks are designed.)

The Judgement card from the Rider-Waite deck is modeled on the Tarot of Marseille. It depicts two groups of the dead, a woman, man, and child, rising from their graves, in a mountainous landscape.

Their pose is influenced by the formerly secret deck of the Hermetic Order of the Golden Dawn, a Victorian magical society that revived interest in the spiritual tarot. A. E. Waite had been a member, even heading a later group that formed from it. The Golden Dawn believed there was a connection between the Hebrew alphabet and the trumps of the tarot. The Judgement card was the letter shin, which looks like a flaming “w”, and is associated with fire. The figures in the trump were grouped to resemble the letter.

Numerology focuses primarily on numbers between 1 to 10. Anything higher is reduced down by adding its digits together, until a smaller number is reached. For example, 20 may be seen as an extension of 2 because = 2+ 0 = 2. Like the High Priestess (2) and Justice (11), some of Judgement’s (20) meaning derives from its relationship to 2. The two’s in the tarot all have themes of balance, polarity, or change, symbolic qualities of 2.