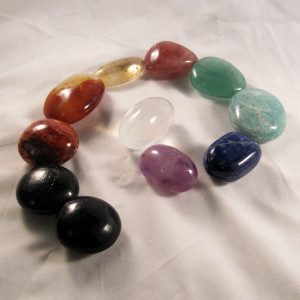 Our workshop this past weekend on body layouts was very popular.  For those of you unable to make it, here is a summary of the basics: how to use a body layout on the chakras.

Sarva mangalam (Sanskrit, “May all be blessed”),

What are the chakras?

The subtle body is believed to mirror our physical body and consciousness, support our health, and represent our spiritual development.  Models come from many different spiritual traditions and often disagree, even within the same religion.  The version most popular in the metaphysical community today is derived from Hinduism.  The first documentation for this shat chakra model (Sanskrit, sat chakra, “six chakras [energy centers]”) comes from the 11th century.  Although named after six, it actually describes seven energy points called chakras (Sanskrit, cakra, “wheel, circle, turning”), produced where lines of moving energy called nadi (Sanskrit, ná¸i, “flow, river, conduit”) cross at locations across the body.  The chakra above the head was thought to be so different, representing the Divine, that it was not included in the count.

Why place stones on the chakras?

Disturbances in the energy body are said to correspond to imbalance in the physical, mental, and emotional bodies, interpersonal relationships, and obstacles in the outer world.  Energy work is believed to restore balance by removing stagnant dense energies, replacing them with fresh refined energy, restoring proper movement, reintegrating parts of the system to the whole, and spiritually sealing the work for longevity over time.

Energy is also thought to flow through stones, when they are used intentionally.  When placed on, around, or under the body, like beneath a massage table, bed, or yoga mat, their energy field is said to entrain the energy body.  The most popular method for the laying on of stones is using a stone on each of the major chakras.  The stones are spiritually activated through prayer, connecting to universal energies around us, or working with a particular healing modality like Reiki.

Although located along the spine and skull, each chakra traditionally has a trigger point on the front of the body, known as a kshetra/kshetram (Sanskrit, ksetra, “field, place, sacred site”) in the original Hindu model.  The term originally referred to the boundary of a sacred space, defining its sphere of influence, like the aura of a temple.  Therefore stones may be placed at the chakra positions on the back or at their equivalent positions on the front of the body.

What are the colors of the chakras?

Although the position of the chakras has been fairly consistent over time, other elements have radically changed, like their symbolic correspondences, directionality, and color.  Most models today adapt a rainbow color scheme introduced by Christopher Hills in the 1970’s: 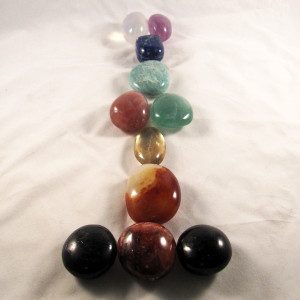 (Example of a chakra set with 3 root, 2 heart, and 2 crown chakra compliments used in the workshop.)

Over time, additional chakras and colors have become popular.  Clear, white, and golden stones are now associated with the Crown Chakra, or chakras believed to exist above it, pink stones with the Heart Chakra, and opaque, black, and brown stones with the Root Chakra, or chakras believed to exist beneath it.  These other colored stones may be selected or used at additional positions beyond the main chakras. 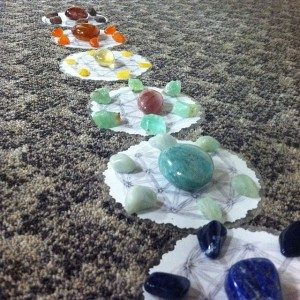 (A series of mini grids underneath a massage table at the workshop.)

Placing stones near the Root Chakra and Second Chakra may be difficult on yourself or inappropriate on another person.  A set of stones may be used instead.  For example, place a stone between the legs and one on each hip to support the Root Chakra.

Although using stones that represent the contemporary rainbow model are a popular technique for chakra work, it is not the only one.  Stones may also be selected and placed intuitively.