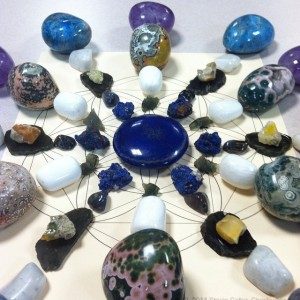 What is an energy “signature”?

Most of the metaphysical properties of stones are derived from their “energy signatures”, insights said to be encoded in their physical qualities, geology, or symbolism. Although the concept is found cross culturally, the term signature originated in 16th century Europe, from the Latin, signatum, meaning “signed”. The belief was God or nature had hidden the uses of a material upon it symbolically.

The main energy signatures for stones that support psychic development, intuition, and divination are:

A: Corresponding Chakra Colors: The rainbow color scheme for the chakras is the foundation of modern stone books. Although the placement of the chakras is traditional, these colors only originated during the late 1960’s. Stones are typically given the qualities of the chakras that correspond to them in color. Therefore minerals in the colors of the Heart to Crown chakras, associated with the spiritual rather than the physical, are used for psychic development:

Of all the chakras, the Third Eye is the one most linked to psychic development. Dark blue stones are consistently recommended for it. The association between the color and intuition is older than the modern color model though. The early 20th century American psychic Edgar Cayce was an early advocate of crystal healing. He recommended lapis lazuli and lapis linguis (Latin, “speaking stone”), believed to be azurite, for meditation, healing, and psychic development.

B: The Chakras and the Five “Clair” Senses: In the original Hindu model, the five lowest chakras are associated with both the five elements and five senses, in both a physical and psychic sense. For example, the third or navel chakra is associated with fire, vision, and clairvoyance.

Traditionally people looking to spiritually connect with fire or develop their spiritual sight work on the corresponding third chakra. Today that may include using yellow stones as a support.

The historical correspondences between the elements, senses, and chakras and their modern colors:

C: Stones that Contain Water: Water is the element most closely associated with the emotions, intuition, and accessing the spiritual realm. Therefore stones that contain water, in their chemical formula or due to inclusion, are commonly used for psychic development. For example, quartz may capture water or other liquids like oil while it forms, known as â€œenhydro quartzâ€. Many minerals are produced by moving water and retain a percentage of it in their crystal structure. For example, opal, turquoise, and malachite.

D: Materials that Come from the Water: Some minerals and other precious materials that literally come from the water are likewise associated with intuition. For example, pearl, shell, and coral. Also stones that have been naturally polished by an ocean, river, or are found near water. For example, Ocean Jasper. Much of its metaphysical properties are derived from its locality, literally on the coast. The deposit was originally only accessible at low tide.

E: Lunar Materials: The Moon traditionally rules the liquid cycles of Earth, from menstruation in women to the oceanic tides. Both the moon and ocean commonly symbolize the “feminine”. They are given traits culturally associated with it like feelings, empathy, and the unconscious. Stones symbolically connected to the moon or ocean have taken on these associations. For example, moonstone, a trade name given to different varieties of feldspar that display a sheen across their surface. Selenite, which translates as “stone of Selene”, a Roman moon goddess, a trade name given to the mineral gypsum.

F: Clarity, Light, and Reflection: We are surrounded by transparent materials today but they were rare historically, associated with insight. Light is a traditional metaphor for energy work so materials that transmit it are also associated with altered states. For example, not only does clear quartz transmit light like a prism, it sparks when struck and glows when rubbed.

G: Cloudy: Paradoxically stones that are translucent rather than transparent may be used. They are thought to represent the veil between realms, like the divide between the living and the dead. For example, chalcedony, the white to blue milky mother stone of many other semi precious stones, is traditionally associated with vision, seeing ghosts, and discerning illusion vs. reality.

H: Reflection and Optical Effects: Minerals that reflect or alter light, producing different optical effects, are also popular. For example, the different colors of labradorite are caused by light scattering off and between the layers of the mineral.

I: Eyes and Orbs: Materials with eye shaped patterning or eye shaped optical effects are associated with perception. Tiger’s eye and cat’s eye have an eye shaped flash created by the physical structure of the mineral, reflecting back light as a shimmer. 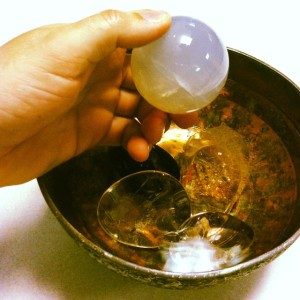