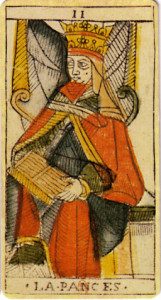 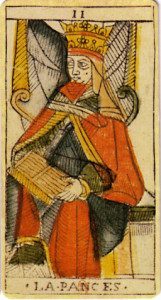 (An early 18th century Popess card, from the Jean Dodal version of the Tarot de Marseille, after which most 19th century esoteric decks were based.)

The High Priestess was formerly known as the Popess or Papess/Papesse, the female Pope. The card depicts a seated woman, with a veil behind her, holding a book on her lap, wearing the triple papal crown.  Other versions of the card include a scepter, a crosier, a staff modeled after a shepherd’s crook, or a pair of keys instead, all symbols of the Catholic church.

The identity of the woman on the card is debated. Mainstream tarot historians interpret the card as an allegory of faith.  The church has often been depicted as a woman, either as the “bride of Christ” or the “Mother Church”, sometimes with the attributes of the Pope. The seated pose with an open book is similar to period representations of Mary during the Annunciation. According to tradition, she was reading when the angel Gabriel appeared to her. The veil and book may also reference the sibyls, female pagan oracles often paired with male Biblical prophets in Christian art.

Some believe the card represents either legendary or historical female popes.

Authors during the late 19th century to early 20th century  “occult revival”, who showed a renewed interest in concealed spiritual traditions, believed the tarot hid a secret wisdom. This belief originated with the Egyptians, was preserved by Kabbalah, the esoteric branch of Judaism, and was revealed by Christian magicians during the Middle Ages and Renaissance.  Many of them described or even produced their own “rectified” tarot decks.  They thought by correcting the names, imagery, or number of the cards, as they understood them, they could restore them back to their original form. 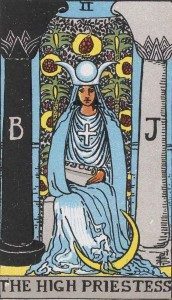 (The High Priestess card from the early 20th century Rider-Waite deck, after which most of our contemporary decks are designed.)

The Popess became the High Priestess.  In A. E. Waite’s influential deck from 1910, she wears the horns of the Egyptian goddess Isis, the moon is at her feet like Mary, and her veil suspended between the two pillars of Solomon’s temple.  The card came to symbolize sacred mysteries throughout time, especially those of the Divine feminine, the unknown, and initiation.

Many tarot trumps have obvious partners, like the Sun and Moon.  In some regional versions of the game of tarot, the Popess, Pope, Empress, and Emperor are known as the papi (Italian, literally “fathers”, but also implies “popes”).  The two pairs symbolize religious and secular power and are all given the same value as trumps.  If two or more papi are played during a round, the last one always trumps the others.  This represents the power struggles between the institutions.

Much of the meaning of the trumps today comes from number symbolism.  The numerology of the tarot has been influenced by both classical Greek thought and Jewish Kabbalah.  While the number 1 represents the point, the number 2 represents the line, the first of the two dimensional objects.  Since a line both separates and connects, the number 2 has taken on opposing qualities like separation, change, and conflict but also relationships, connection, and balance.

While the point represents potential, the line is the building block of all two and three dimensional objects.  Therefore the number 2 signifies the birth of the physical, material, and duality.  While the number 1 is usually not gendered, other odd numbers are often seen as “masculine” and the even numbers “feminine” because of the line’s role in birthing all other shapes.

You can also learn about stones used for psychic development, intuition, and divination.