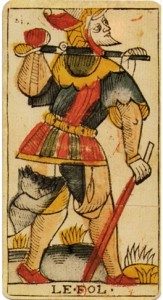 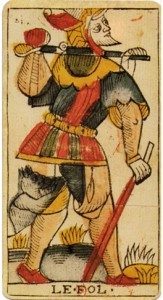 (A 15th century Fool card, from the Jean Dodal version of the Tarot de Marseille, after which most 19th century decks were based.)

Much of the Fool’s symbolism originates in its name and imagery, directly related to its original function in the game of tarot. The tarot began as a deck for a trick taking card game similar to bridge. In bridge one of the four suits (spades, hearts, diamonds, and clubs) is named the trump suit and has a higher value during the game.

The tarot has four suits (wands, cups, swords, and coins) plus an additional suit of 21 permanent trumps and one wild card, the Fool. Because it excuses a player from following suit, allowing them to protect a more valuable card, it is also known as the Excuse. However the Fool cannot win the trick and using it allows the next player to change suit.

The Fool’s association with spontaneity, changing direction, and calculated risk are all derived from its original wild card status.  Likewise disruption, reversal, and chance.  These are also qualities of the trickster archetype, who uses delay, repetition, or inversion to bring awareness to an unaddressed crisis, often through absurdity, humor, or breaking the rules. 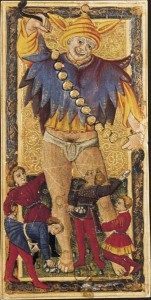 However those outside the hierarchy of society are not always welcome.  The 15th century Fool card at the top of the page depicts someone in poverty, wandering on the edges of society, being harassed by a guard dog.   The disheveled Fool from the 15th century “Charles IV” tarot above is being driven out of town by stone throwing children.  He wears donkey ears to represent his foolishness.  The card represented lunacy, madness, and folly to 18th century cartomancers.

By the 19th century, both its meaning and representation had shifted dramatically.   The Fool came to represent the hero of the tarot and the dog his faithful companion, warning him about his obliviousness to the danger ahead.  The card came to symbolize a leap of faith, wisdom rather than worldly knowledge, and the beginning of our spiritual journey, represented by the remaining 21 tarot trumps. 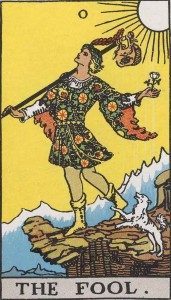 (The Fool card from the early 20th century Rider-Waite deck, after which most of our contemporary decks are designed.)

None of the trumps in the earliest tarot decks were numbered.  Later card makers gave them numbers to show their relative rank as trumps.  As the wild card though, the Fool remained unnumbered and was later attributed to 0.  In the original game of tarot, the Fool was “worthless”, unable to win a trick, but incredibly potent because it changed the flow of the game.  Because of its association with 0, and therefore the start of the trumps, it came to mean new beginnings, potency, and nothingness as a metaphor for the spiritual realm behind the material world.