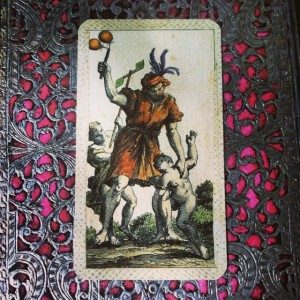 (The Fool in the Minchiate deck. A cousin to the Tarot with additional trump cards.)

The following article gives instructions on the sequence of cards covered for this free, self-study tarot series, “Fooling with the Deck”, by Christopher Lee Matthews of Enter the Earth.

Where does the symbolism of the Tarot cards come from?

Most of the meanings attributed to the tarot today are derived from:

1:  The symbolism of individual cards.

3:  Historical correspondences, especially those used by 19th century authors. During this period, specific cards were connected to different elements, numbers, and planets.

One way to study the tarot is to organize the cards by these traditional associations, especially number.  Rather than advocating for a particular model, this reveals the inherited structure that lies just beneath our modern understanding.

Why group together the numerically related trump cards?

Cards have taken on the symbolism of the particular numbers attributed to them. For example, the High Priestess is typically represented today as a robed woman, seated before a veiled temple door, with the crescent moon at her feet.  This name and imagery associates it with feminine wisdom, spiritual mysteries, and things just beneath the surface like intuition, instincts, and the subconscious.

Some of these traits are also reflected in the number two, attributed to the High Priestess.  It symbolizes cycles of change, decision making, and balancing duality.  Similar themes are seen in the number 2 pip cards of each suit and other trumps related to 2 numerologically.

Numerology focuses primarily on numbers between 1-9 or 1-10. Anything higher may be broken down into something smaller.  For example, many believe the High Priestess has a relationship with Justice, connected to 11, and Judgement, connected to 20, because these numbers can be further reduced to 2 numerologically:

Because number symbolism is so key to understanding both contemporary and historic models of the tarot, I have grouped the cards together by their numbers.  For example:

Why group together the numerically related pip cards?

19th century authors linked each suit with one of the four classical elements. The most popular model was:

They also linked the numbers 3-9 with one of the seven classical planets:

The pip cards were understood as a union of these two sets of symbols.  Cards were given meanings based on their status as a harmonious or dissonant combination of the element and planet.  For example, the 6 of Cups = Sun (6) + Water (Cups). It signifies things like childhood, memories, and generosity. It was considered a harmonious blend of the Sun (consciousness, vitality, and the “masculine”) + water (emotions, the unconscious, and intuition).

All the 6’s are stereotypically positive cards because of their association with the Sun.

On the other hand, the 5 of Cups = Mars (5) + Water (Cups) signifies things like emotional loss, agitated feelings, and focusing on lack rather than available resources. It was considered a dissonant blend of Mars (movement, aggression, and the “masculine”) + water (emotions, the unconscious, and intuition).

All the 5’s are considered more challenging cards because of their association with Mars.

Although the foundation of these 19th century theories is rejected my mainstream scholarship, the tarot having an Egyptian origin, being preserved by Jewish Kabbalah, and hidden in plain sight as a card game, it continues to shape our divinatory understanding of the cards today.

How are the cards being organized?