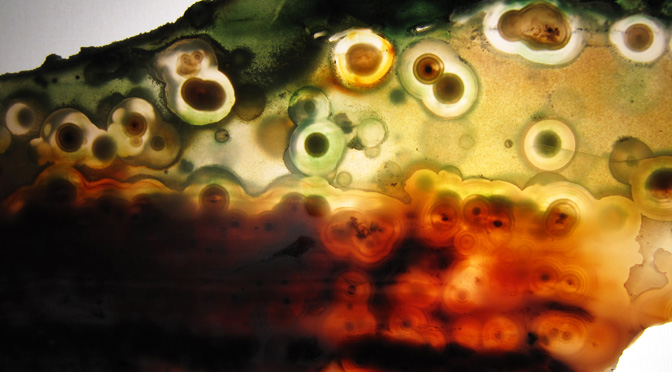 An Introduction to Ocean Jasper® by Christopher Lee Matthews 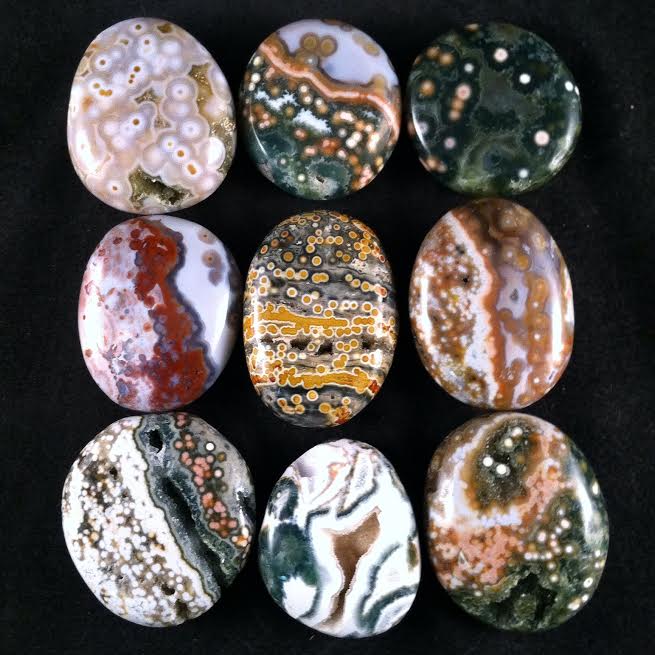 (A selection of flat Ocean Jasper® pebbles showing its range of colors, patterns, and translucency, sometimes even in the same piece.)

Looking for the metaphysical properties of Ocean Jasper®?  Check out my other blog here.

What is Ocean Jasper®?

Ocean Jasper® is a trademarked name for a multicolored stone from Madagascar, typically with spherical patterning. Although commonly described as an orbicular jasper, the most recent research suggests it is the mineral chalcedony instead. Some pieces have agate banding or druses of clear quartz, a coating of tiny crystals, known more commonly as “druzy”.

The variety of quartz known as chalcedony is often unfamiliar to people. It is actually the mother stone of many semiprecious gems: banded chalcedony is better known as agate, red as carnelian, and black as onyx, etc. Its capacity to transmit light is a characteristic of chalcedony. By definition jasper is not translucent, unless cut extremely thin.

Although chalcedony (chal•ce•do•ny) is more technically pronounced “kal-seh-duh-knee”, it is more commonly said like “kal-suh-dough-knee”. 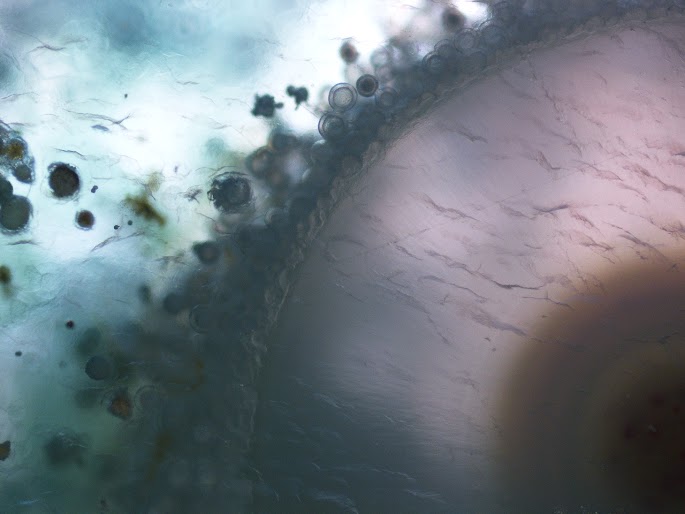 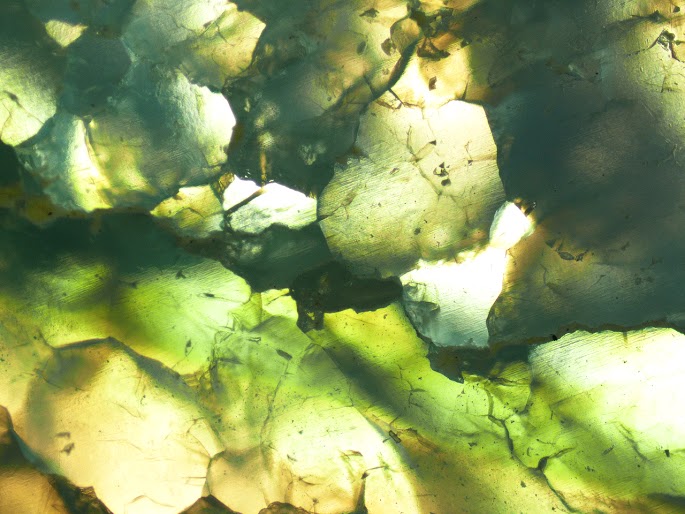 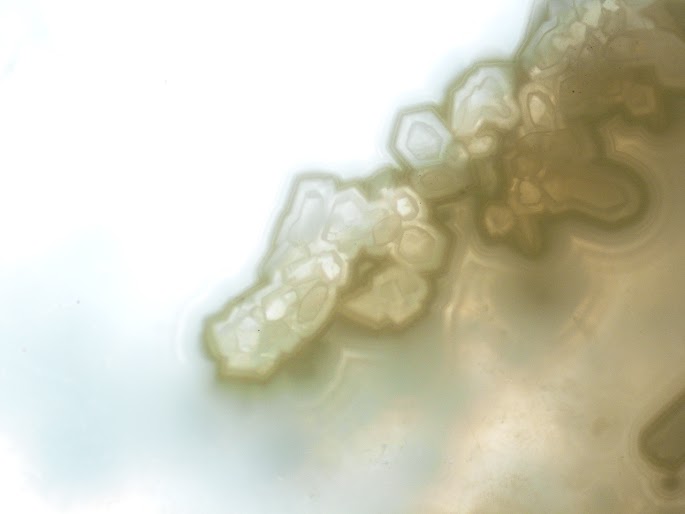 The best known research on Ocean Jasper® is by Dr. Werner Lieber. He theorized that it is a sphärolithischer Chalcedon (German, “spherulitic or orbicular chalcedony”). Spherulitic refers to spherulites, a more technical name for the orbs. In geology a spherulite is a spherical body, created by radial growth around a central point, like the spokes of a wheel. It is easy to forget that the bulls-eyes, flowers/stars (orbs surrounded by druzy quartz), and irregular polygons are all crosscuts of three dimensional objects. 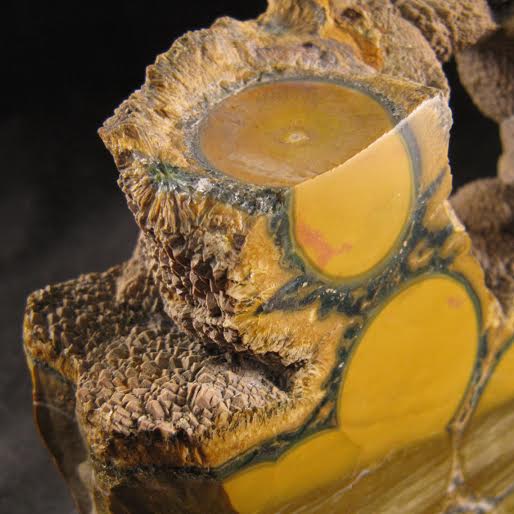 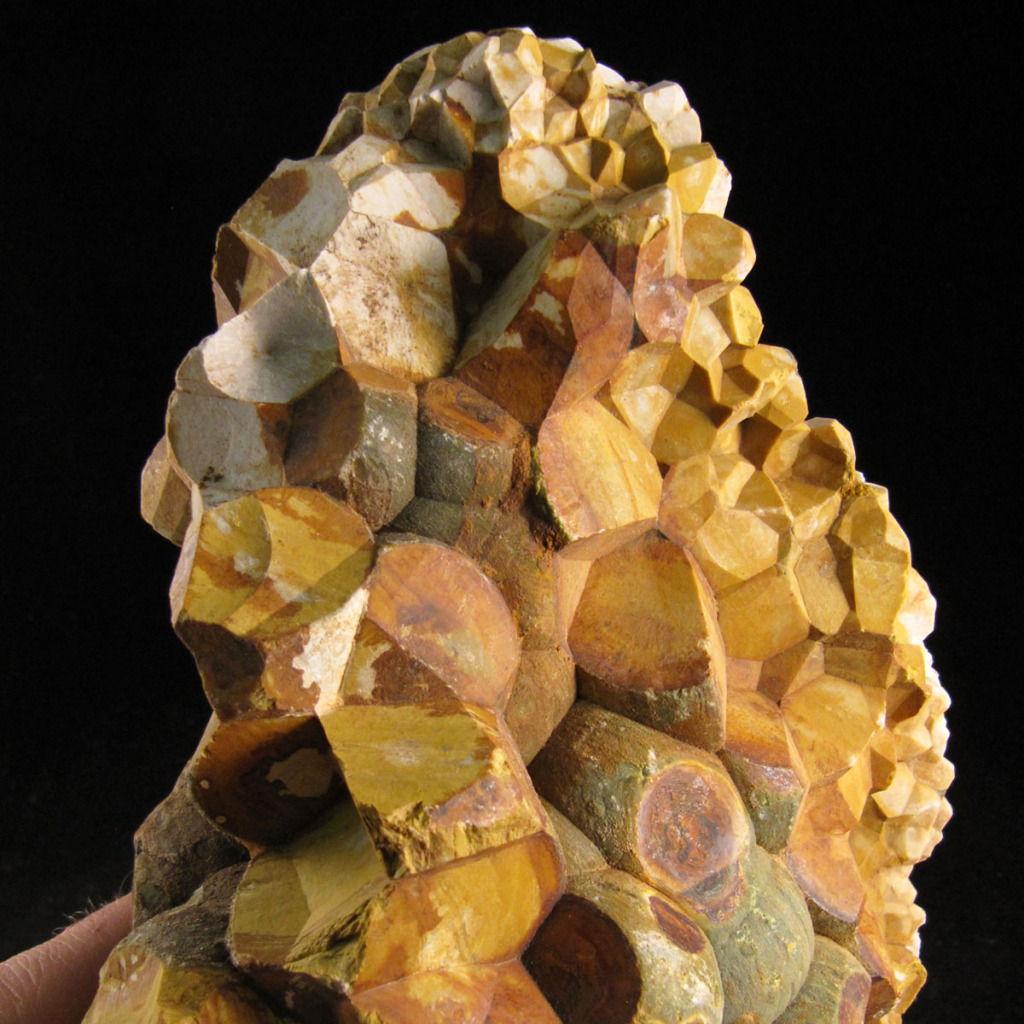 When thin sections of Ocean Jasper® are examined under a polarized light microscope, the stone is revealed to be fibrous chalcedony spherulites, the flower like patterns, among grains of chalcedony and quartz. Irregular polygrams are produced where two or more of the orbs touch one another, a formation sometimes seen on a larger scale, especially in material from Kabamby. 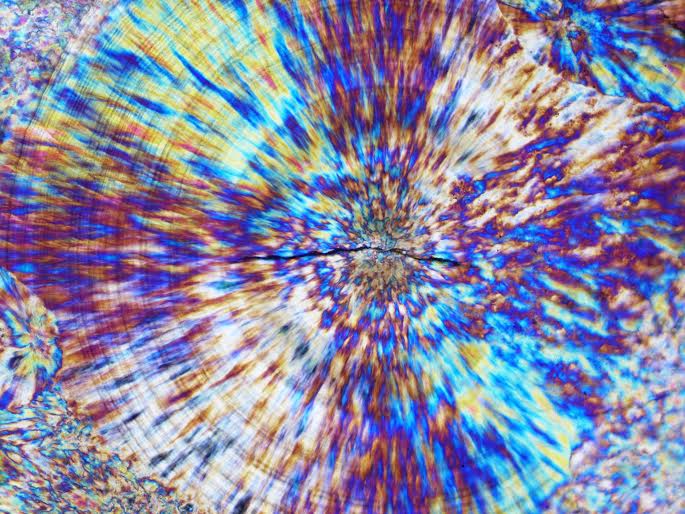 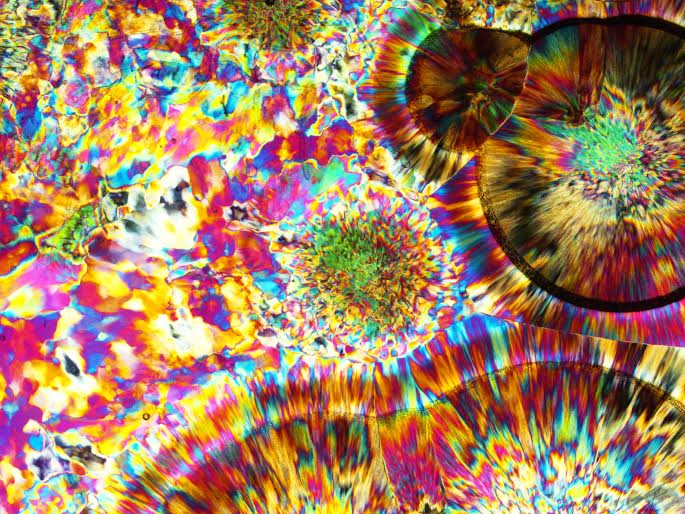 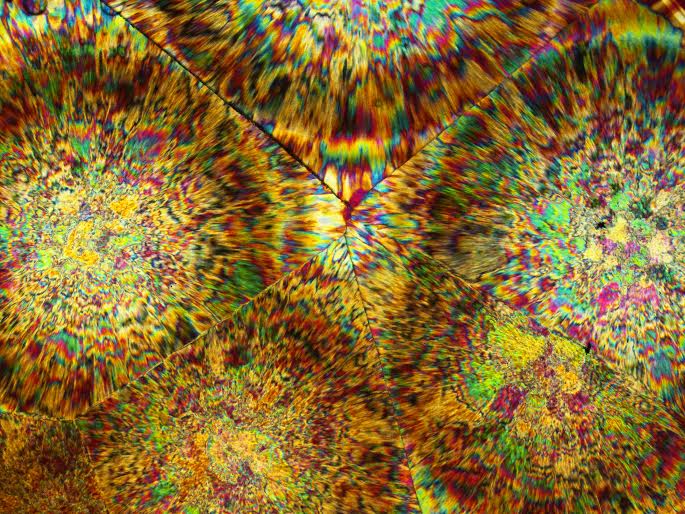 (Above: Crosscut of an orb, made of fibrous chalcedony with an iron oxide included center. Middle: Orbs and granular chalcedony and quartz.  Below: Growth interference between orbs, producing irregular polygrams.  Polarized light microphotography of Ocean Jasper®, courtesy of Lee Bills, ©2015. Prints of his work are available here.) 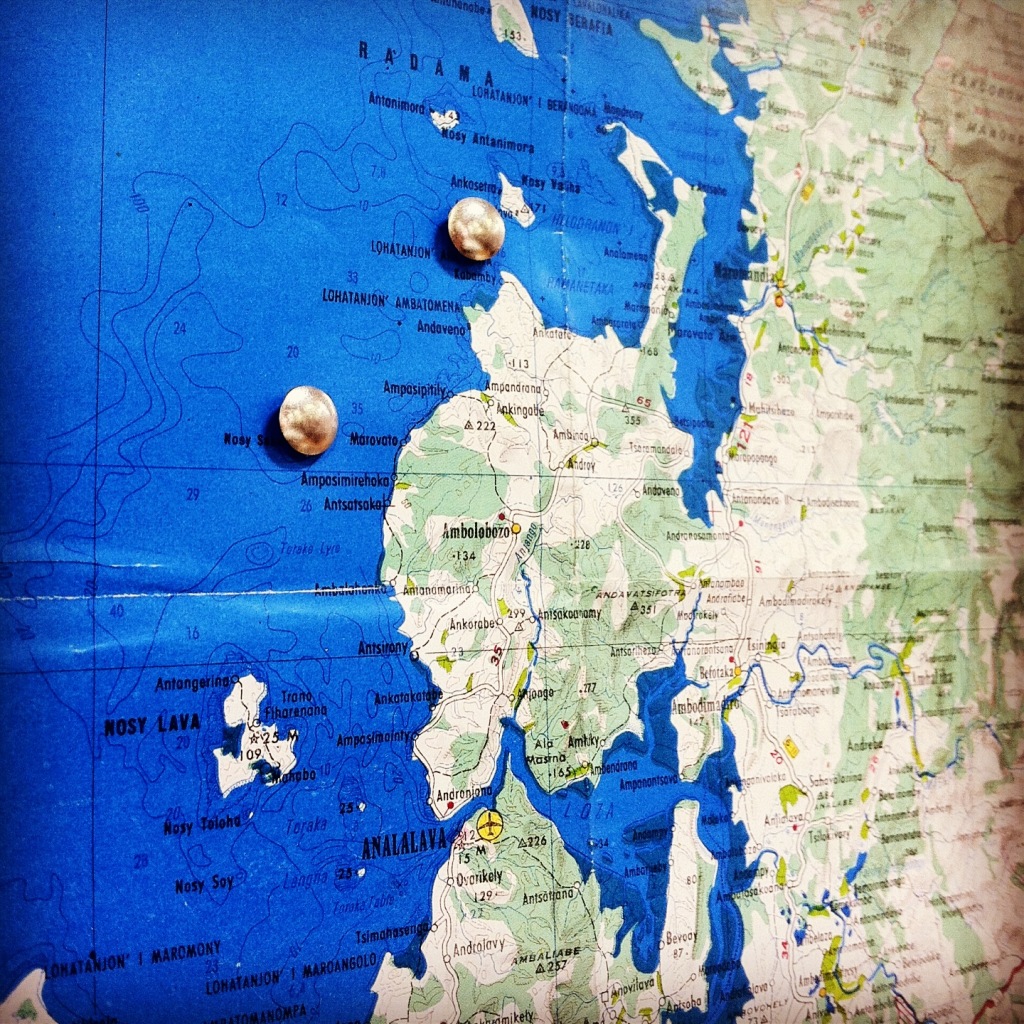 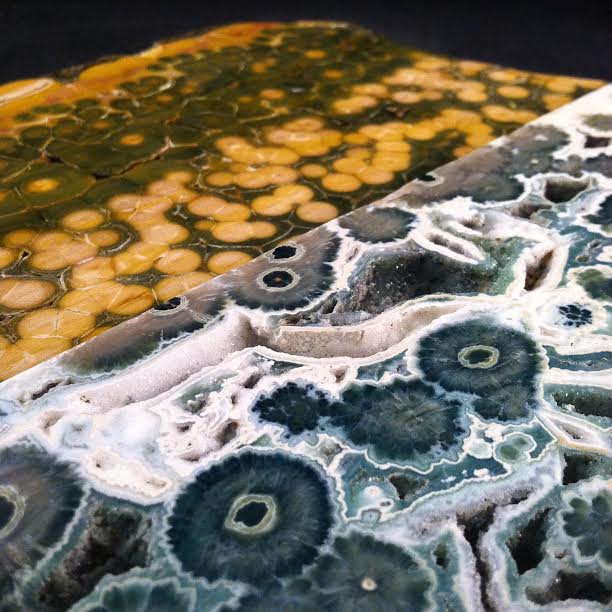 (Although all Ocean Jasper® comes from one area in Madagascar, there are actually two different deposits.   The pins in the map above are by their names.  Marovato is on the coast [left pin], Kabamby is further inland [right pin].  The slab on the bottom/right came from Marovato and the top/left from Kabamby.)

Where does Ocean Jasper® come from?

Ocean Jasper® only comes from one place in the world, northwestern Madagascar. It is found in the Analalava district of the Sofia region in the former province of Mahajanga. There are actually two different deposits, about ten miles apart: 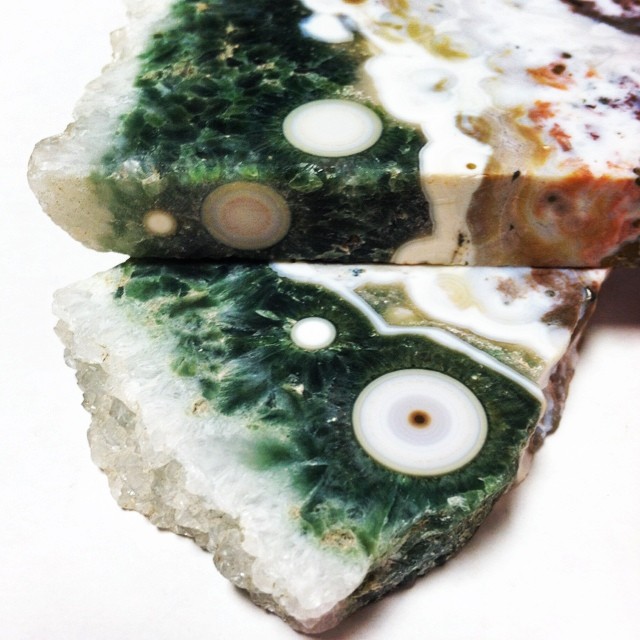 1: Near the village of Marovato, directly on the shoreline, known for its multicolored orbs, translucency, and druzy . (The name Marovato means “many stones” in Malagasy.) 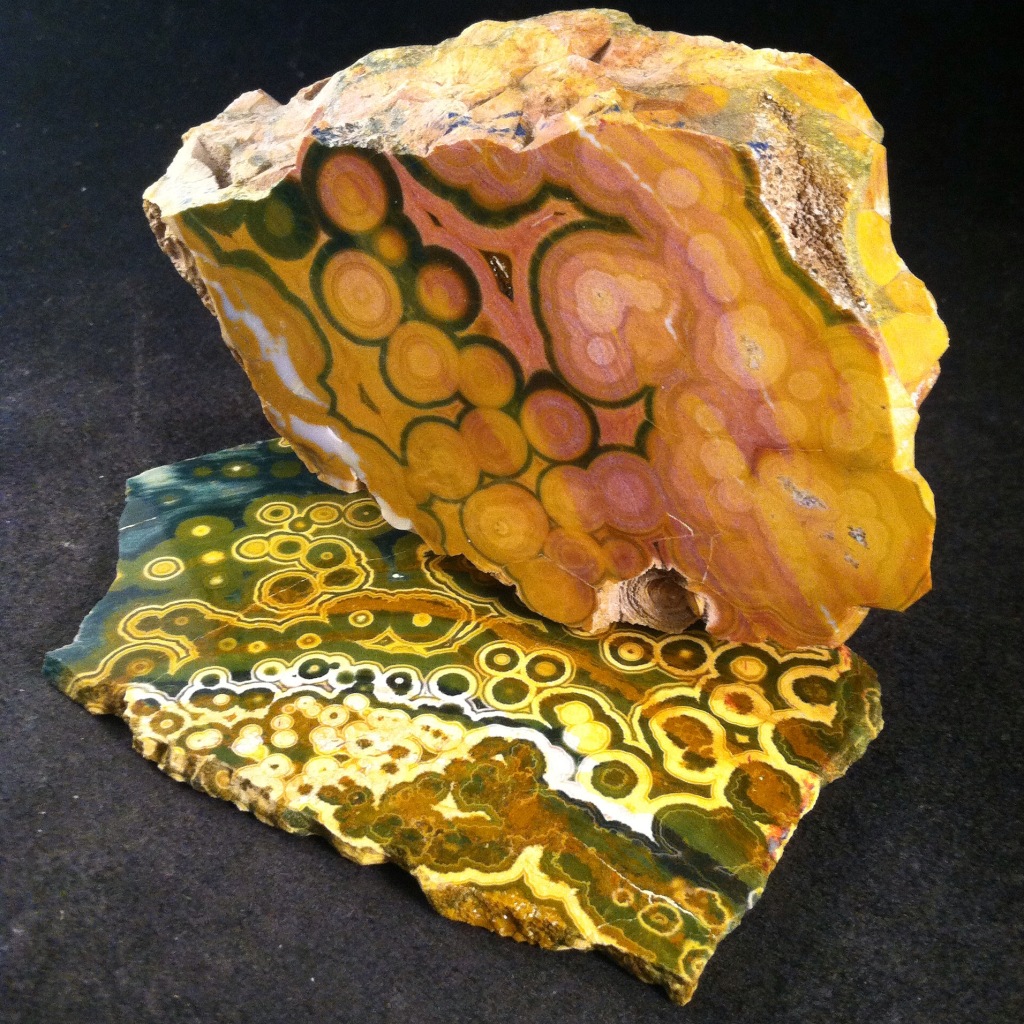 2: Near the village of Kabamby, about a mile and a half inland, known for its consistent green and yellow colors, opaqueness, and geometric patterning created by contact between orbs. (The name “Kabamby” does not translate into anything else in Malagasy.)

Kabamby Ocean Jasper® is often confused with Kabamba Jasper, a green and black rhyolite with eye shaped patterning from central Madagascar instead.

What are the different varieties of Ocean Jasper®?

Eight different veins of Ocean Jasper® have been discovered in Marovato and each has produced slightly different looking stones. The first vein was the largest, the second was much smaller, and the last two were even smaller.  Additional material was sometimes found through surface mining, often revealed by extreme weather. 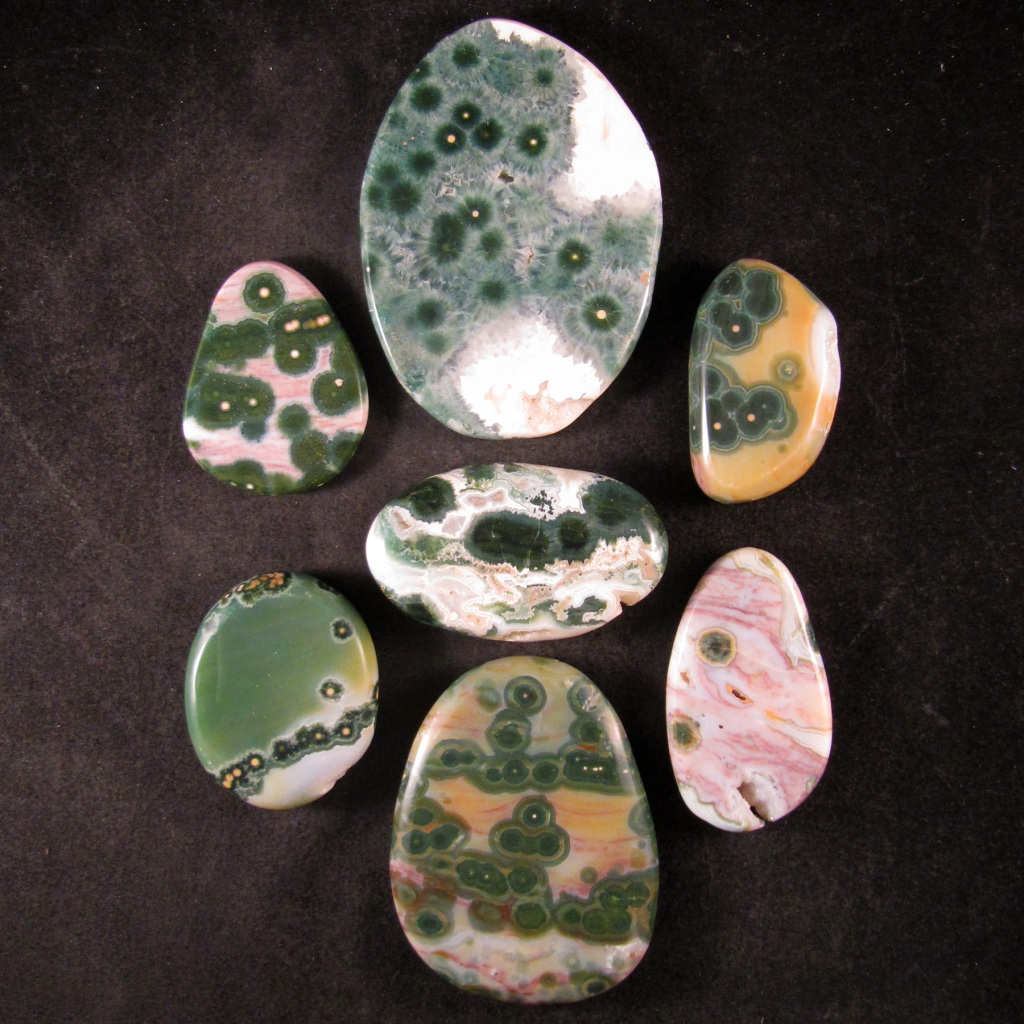 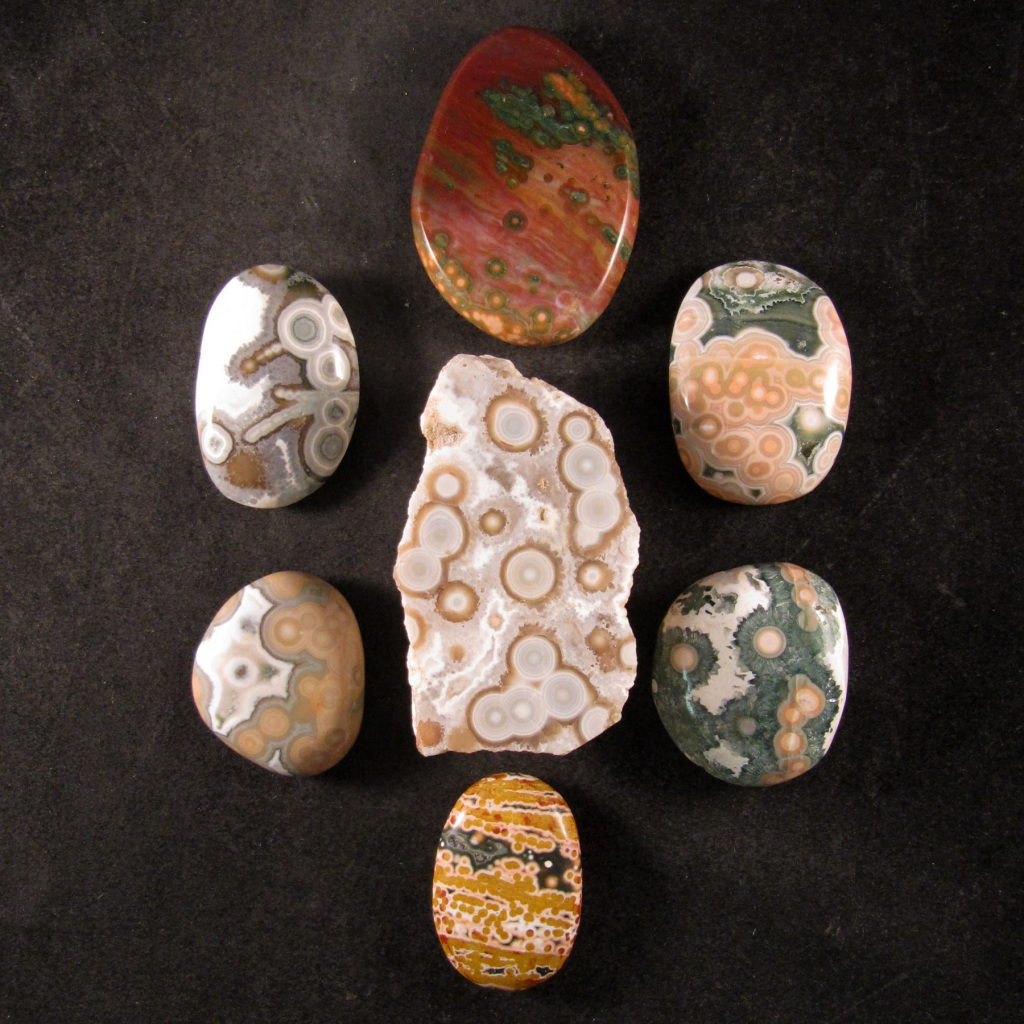 The second vein was mined from 2005-2006. It tends to have a wider range of colors, including more reds and yellows, with some extremely clear orbs, often in bulls-eyes. It was approximately 35 feet long by 15 feet wide. 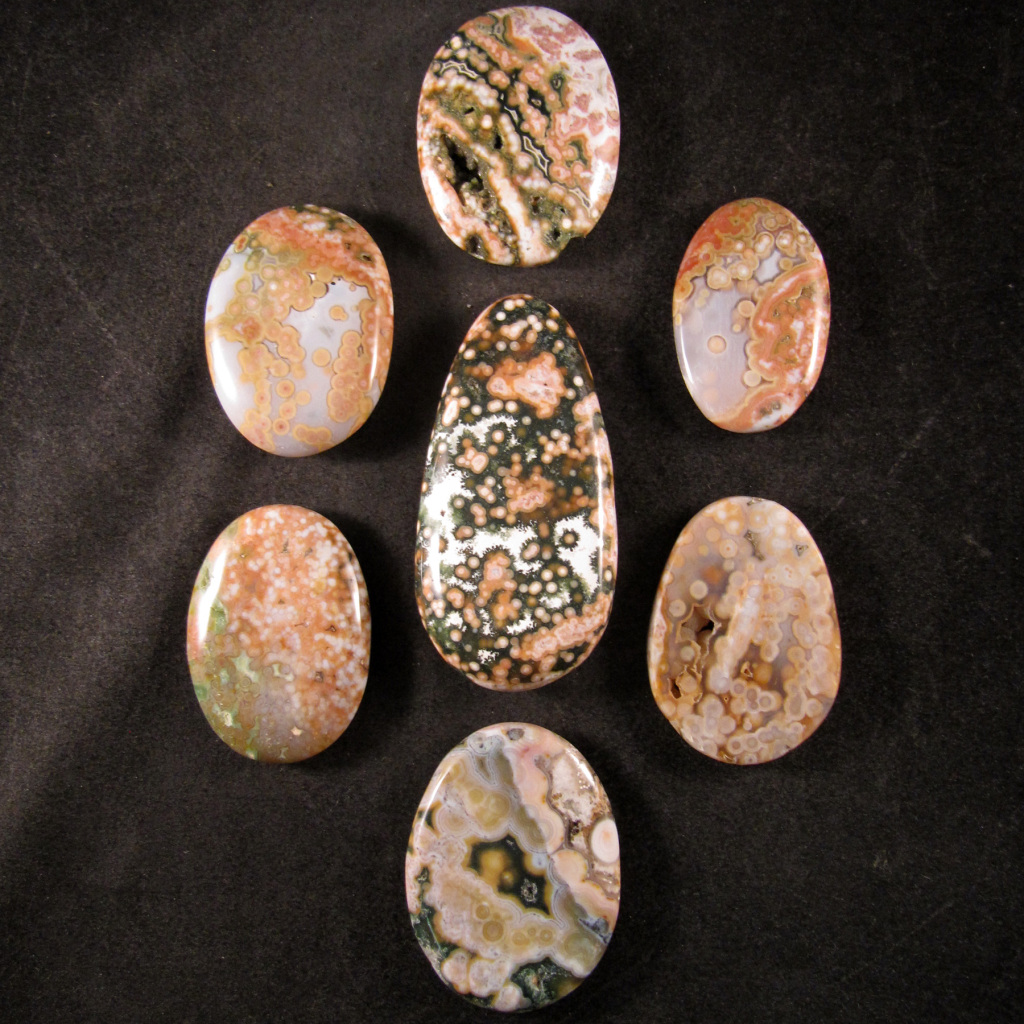 A third vein was found in 2013 but was tapped out after only six months. It was further inland. It tends to be pink, green, and white, with some clearly defined orbs, sometimes yellow.  It was approximately 10 feet long by 7 feet wide. 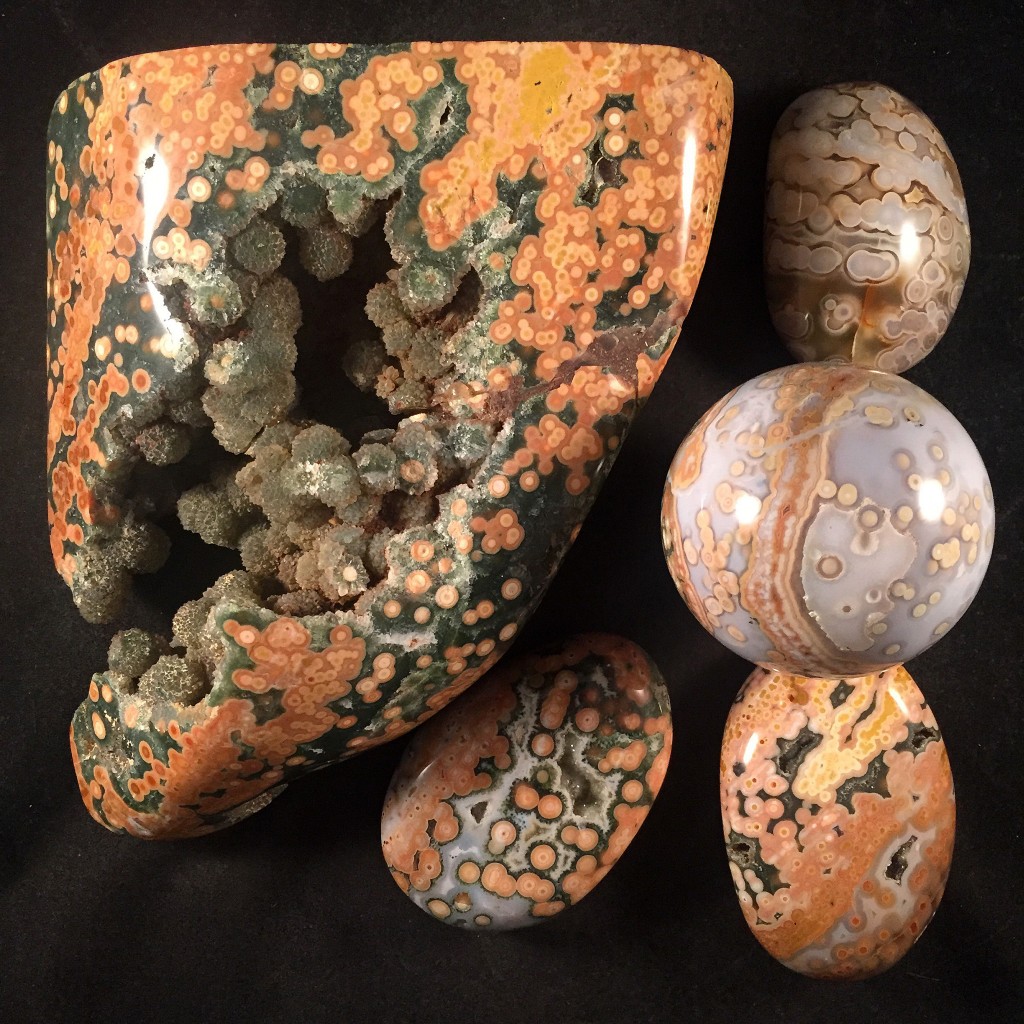 A fourth vein was found in 2014 but only lasted three months.  It was also discovered further inland, about 1/3 of a mile south of the first vein.  It was approximately 23 feet long by 16 feet across.  The material tends to be pink, green, and white, sometimes yellow.   Many pieces have small but defined orbs, similar to some stones from the second vein.

UPDATE: Four more veins have been found in Marovato since the publication of this article, bringing the number to eight.  Please stay tuned for additional updates.

The material from Kabamby is dark green and golden yellow, sometimes pink, red, and off white. It was first mined in 2002 and continues to be collected today. Kabamby Ocean Jasper® is found through surface mining across an approximately 15 mile area. 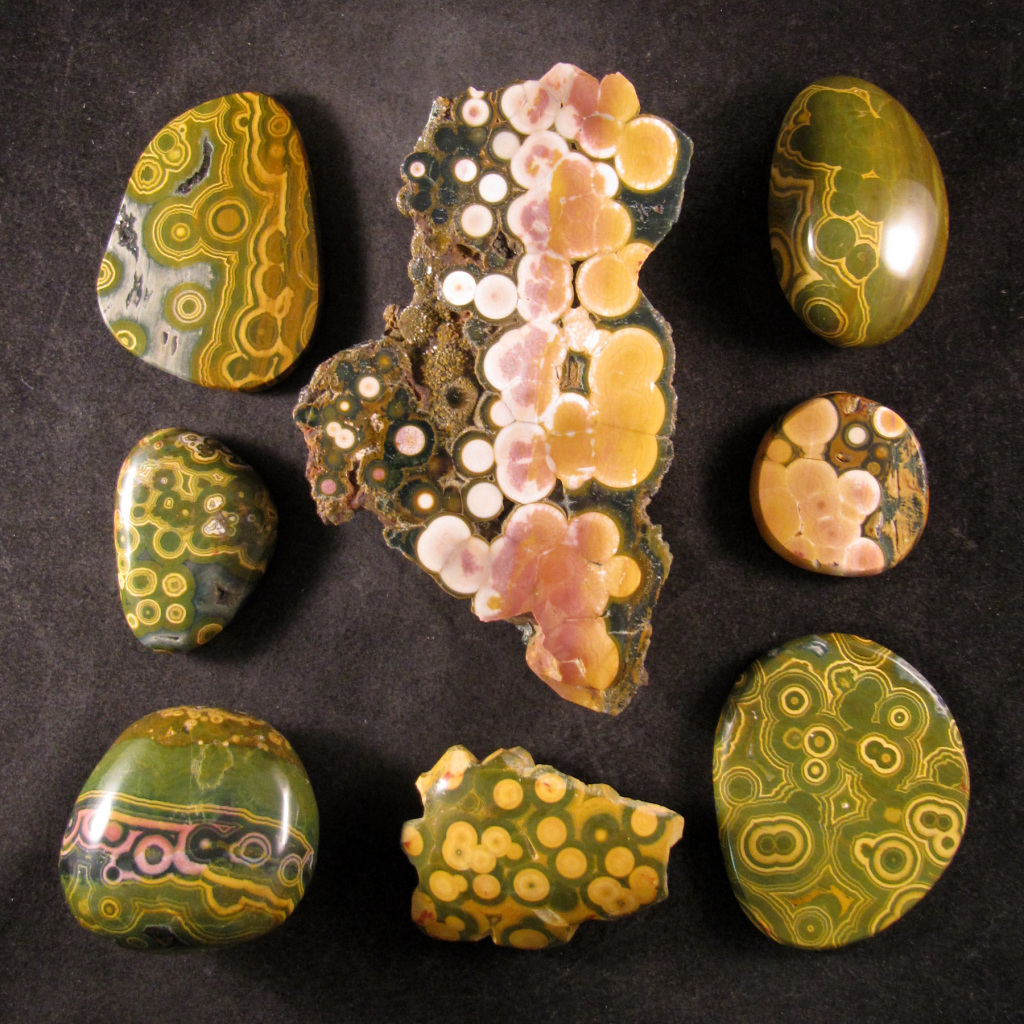 The same claim produces other stones too, the best known being Ocean Wave Jasper. It has a similar color palette to Ocean Jasper® but lacks orbs, displaying wavy bands instead. It was mined from 2002 to 2006. 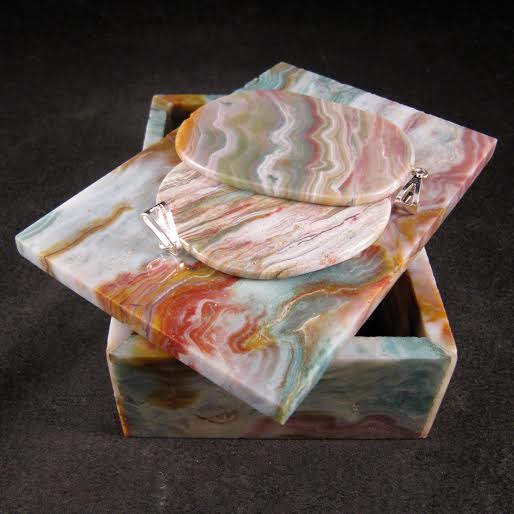 How was Ocean Jasper® discovered?

The early history of Ocean Jasper® is still mysterious.  The existence of chalcedony deposits in the area was first written about in Alfred Lacroix’s Minéralogie de Madagascar (French, “Mineralogy of Madagascar”), published in 1922.  However orbicular material is not specifically mentioned.

Research does suggest that at least the Kabamby location was worked at one time but then forgotten.  Dr. Klaus Thalheim has documented one of the earliest known examples of Ocean Jasper®, a slab from Kabamby.  It belonged to Richard Baldauf, an early 20th century German collector. The original 1927 receipt describes it as Augenjaspis (German, “eye jasper”) from Kabamby, the correct locality.

In 1977 a photo of Kabamby Ocean Jasper® was included in Grund’s Encyclopédie des Minéraux (French, “Encyclopedia of Minerals”), sparking interest in the stone. However, the locality was incorrectly listed as Kabamba, in central Madagascar. 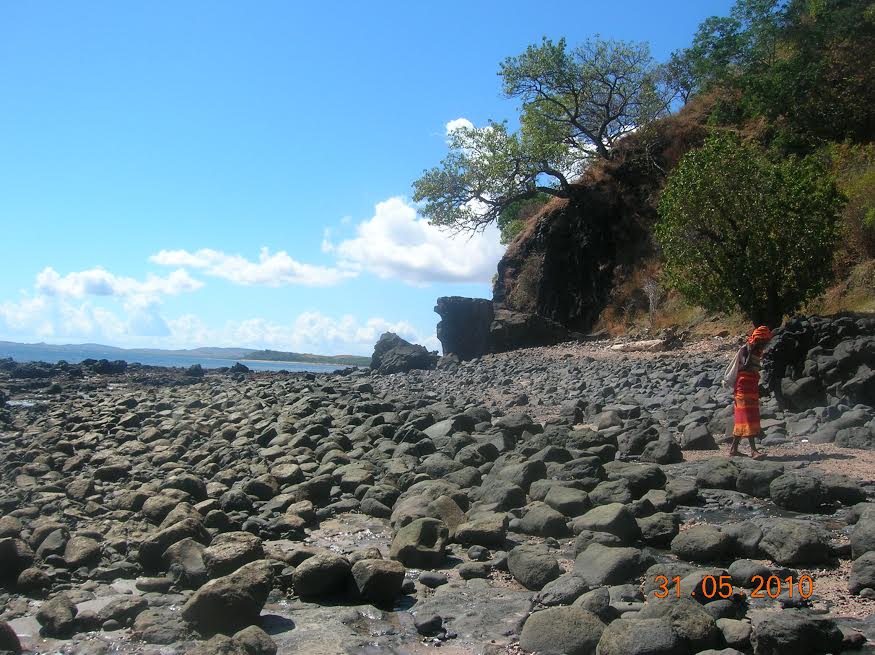 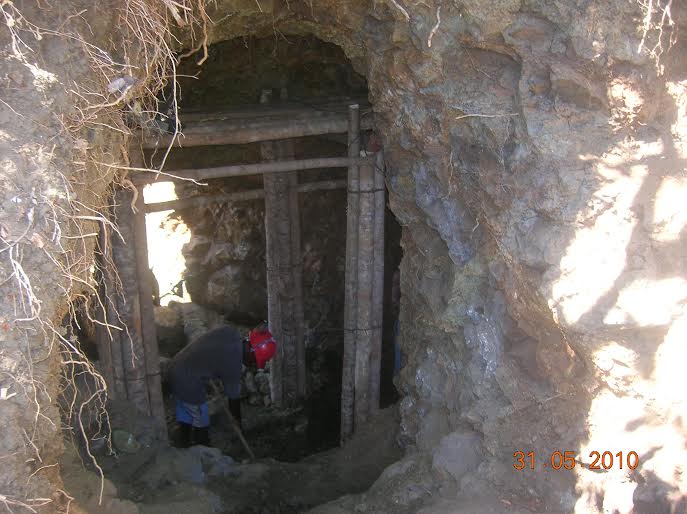 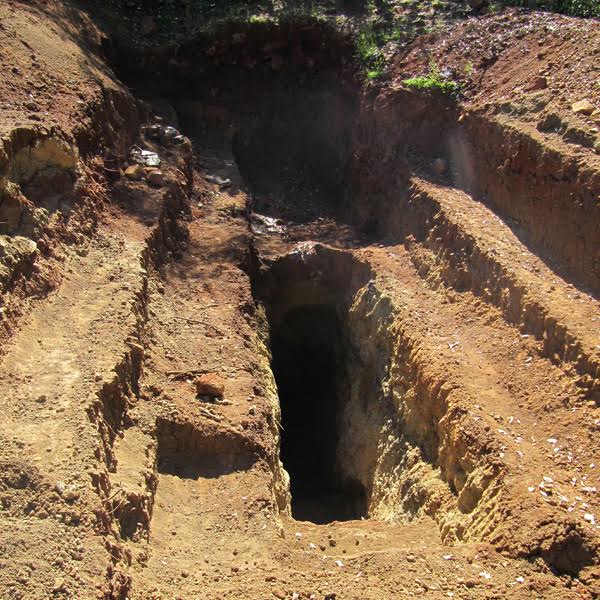 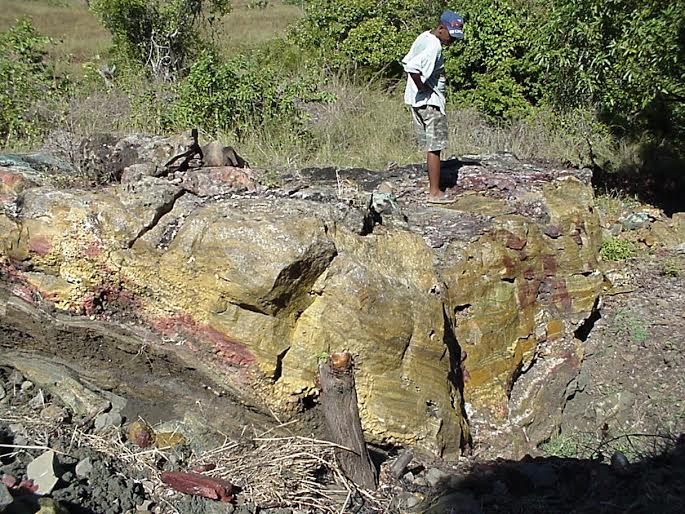 Ocean Jasper® was rediscovered at the turn of the millennium by Paul Obeniche.  Like many others, he first saw it in Grund’s encyclopedia.  Later a prospector brought him a few samples, knowing only that it was found along the northwestern coast of Madagascar.  Paul launched a series of excursions to locate it.  Ocean Jasper® was found again in October of 1999, on the shoreline outside the village of Marovato. Low tide made it visible.  The material here was surprisingly different than the green and yellow stone he expected to find, with a larger color palette. The original Kabamby material was found nearby later. 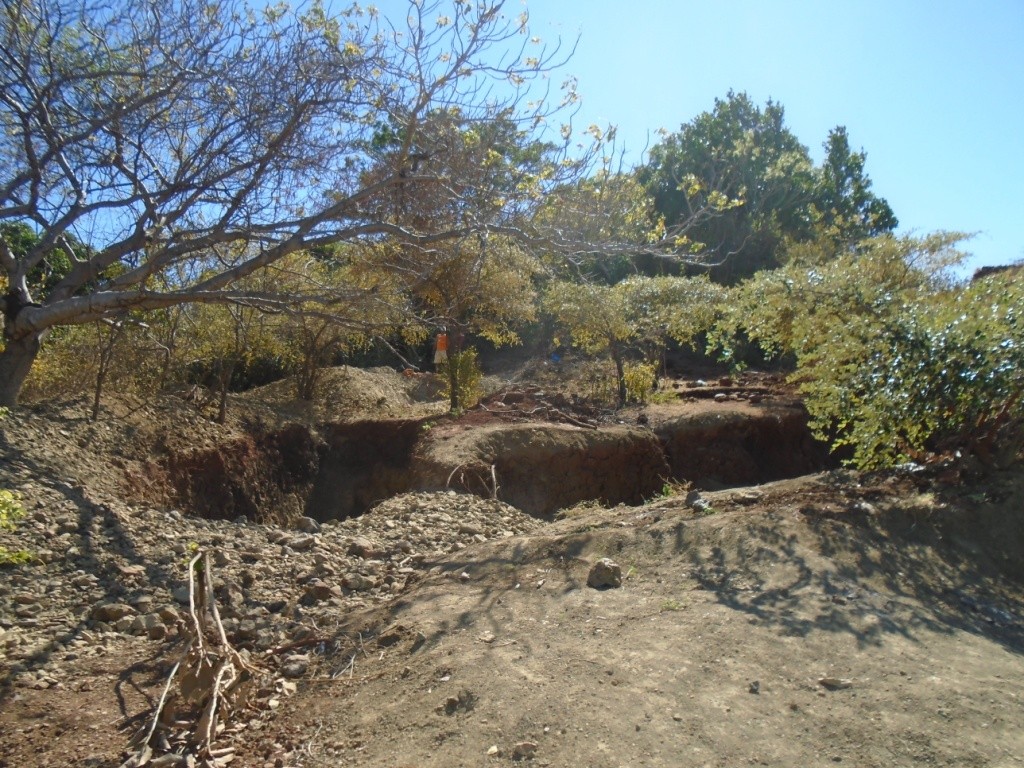 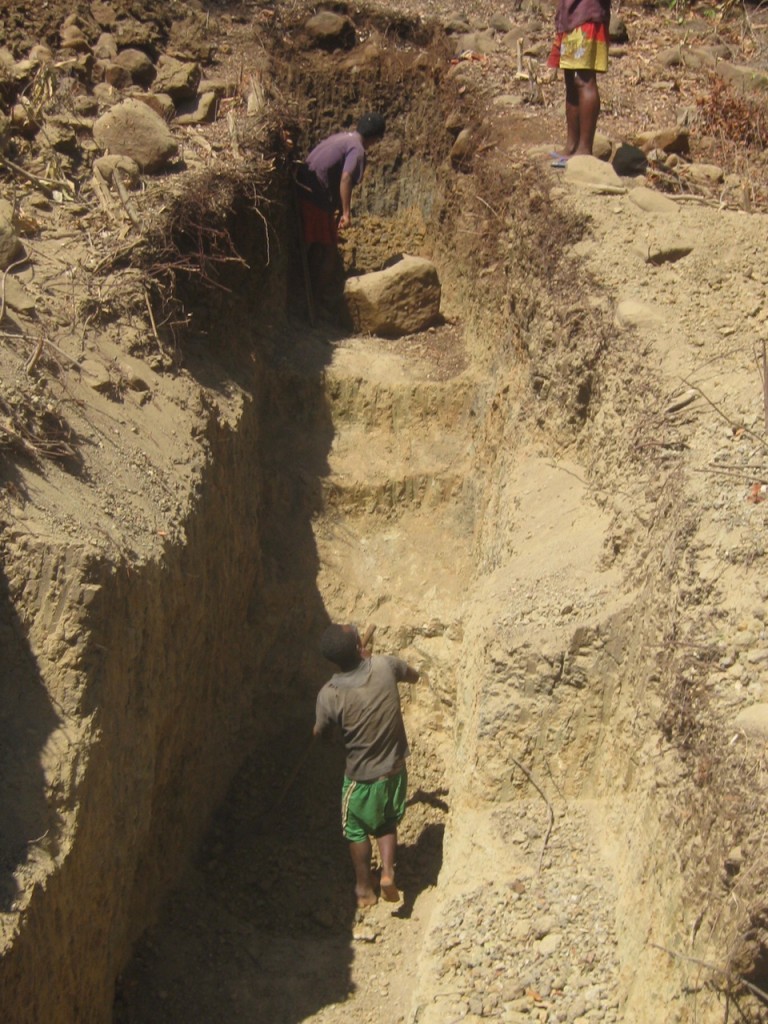 (Ocean Jasper® is mined in Marovato using shallow trenches, since the stone formed there in distinct veins, found near the surface.  These photos are from the fourth vein worked for a few months in 2014.)

Because it was originally collected along the shoreline, many people believe all Ocean Jasper® comes from the water.  While the first and second Marovato veins were discovered directly on the beach, the mines themselves were underground.  The third vein was discovered much later, approximately 330 feet further inland, and the Kabamby mine is about 1.5 miles inland. 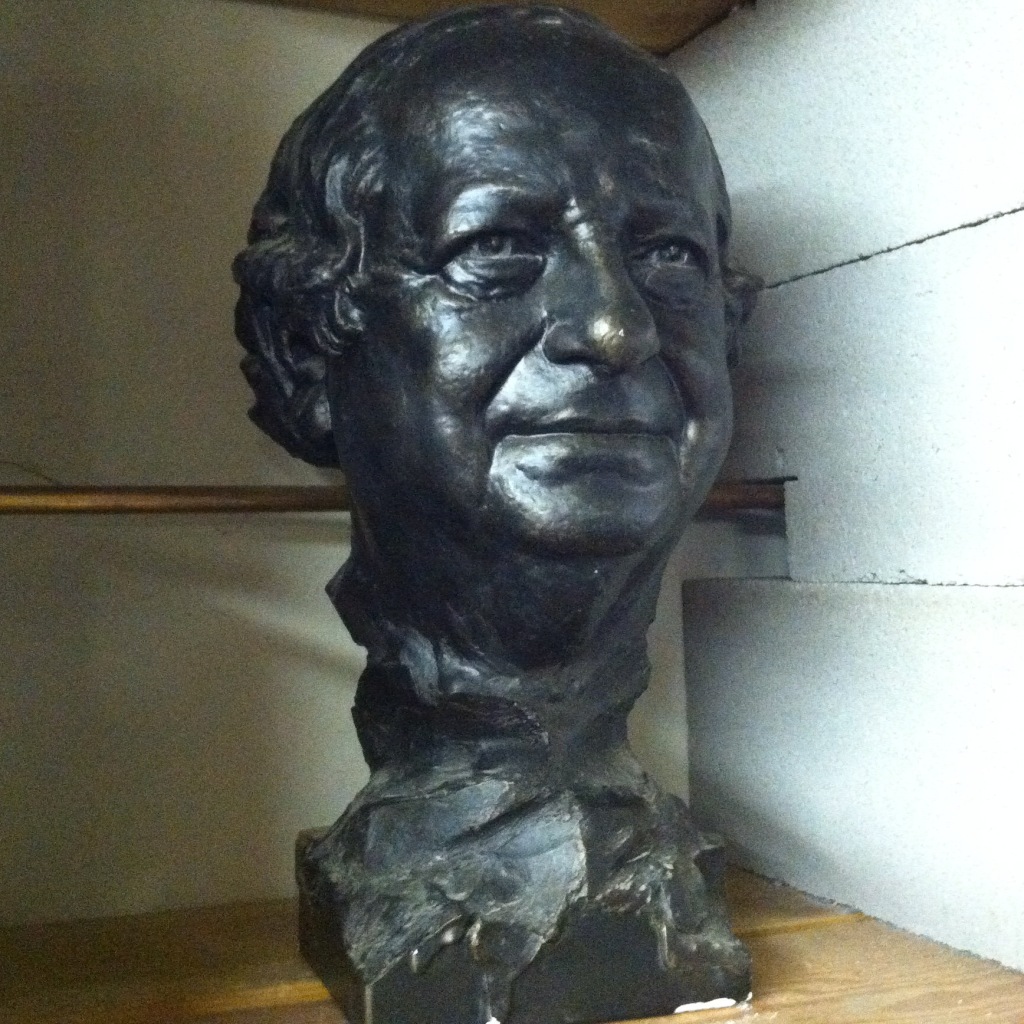 (Paul Obeniche’s bust watching over his booth at the Tucson Show Place.)

Ocean Jasper® was introduced to the general public at the Tucson gem show in January of 2000. It was named there by Paul Obeniche and Eugene Mueller of the Gem Shop.  They called it Ocean Jasper® because it resembles the waves and ripples of water and the mine was first discovered along the shoreline, originally accessible only at low tide.  (The name Ocean Jasper® was originally registered as a trademark by the Gem Shop in 2001.  Enter the Earth became the trademark owner in 2022.)

Paul Obeniche was the mentor of Nader Kawar, the owner of Enter the Earth.  He passed in November 2020.  Our company has managed the Ocean Jasper® mines since 2013 and Nader is actively looking for more material. 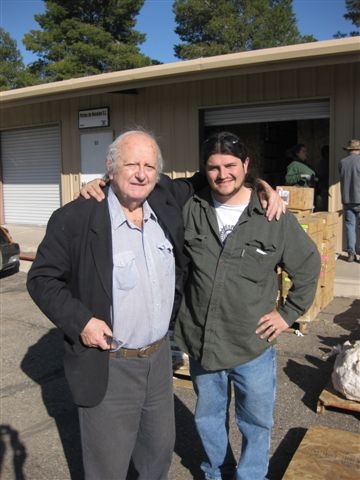 What are your social responsibility practices?

You can find the most up to date information on our charitable giving, factory and mine safety practices, and land reclamation here on our wholesale website.

© 2015, Ocean Jasper® microphotography, Lee Wills.  Prints of his work are available at www.etsy.com/shop/MYcroscopicLife.  He can also be contacted at leebills@live.com.